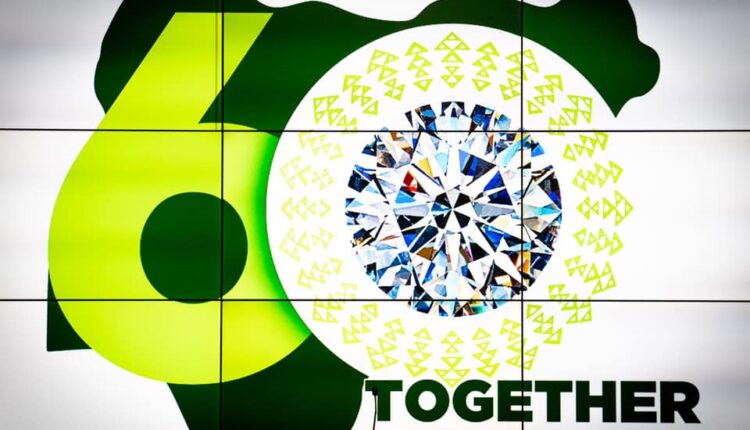 As part of activities to commemorate this years’ Independence Day, President Muhammadu Buhari, has unveiled the 60th independence anniversary logo with the theme, ‘Together’, saying the country must remain united irrespective of differences.

He explained that the need to forge a united front and ensure the current generation bequeath a befitting country to future generation necessitated a logo that would resonate with Nigerians and spur everyone to work for the betterment of the country.

President Buhari said that the diamond anniversary demands utmost retrospect from Nigerians to bury their differences and embrace a path of peace to ensure a prosperous nation everyone would be proud of.

Speaking while unveiling the theme and logo for the commemorative activities to celebrate 60 years of independence in Abuja on Wednesday, the President described Nigeria as the most prosperous black nation in the world.

Nigeria at 60 theme, ‘Together’,  with the logo was projected and unveiled virtually on the 12 by 20 feet screen at the Council Chambers, before the commencement of the e-Federal Executive Council (FEC) meeting presided over by Buhari.

Through a statement released by his spokesperson, Femi Adesina, the President performed the exercise in the presence of some cabinet ministers and other members of the council who joined the meeting online.

According to him, the country was standing on the threshold of history as we formally begin a series of activities commemorating Nigeria’s diamond anniversary.

‘‘The task history has saddled me with today is to proclaim a theme that will keep us united, help us forge ahead and unveil a logo that will form the critical pillars which our 11-month modest commemorative activities would rest on. Celebrating sixty years of independence really calls for pomp, but the global COVID-19 pandemic, which has forced all nations in the world to think and act differently, has also foisted on us the imperative of a low-keyed celebration.

‘‘Operating within the limitations placed by the COVID-19 pandemic, we created an internet challenge for Nigerians to make a choice from a set of four pre-selected logos that would appropriately define the theme. Of these four options, Nigerians from all walks of life participated in making a choice and I am happy to let you know that the logo I would be unveiling is a product of choice from the Nigerian people,” the statement quoted Buhari as saying.

Explaining rationale behind the logo, the President revealed that the logo and theme depicts the country’s togetherness as nation with over 200 million people whose natural talent, grit and passion glitter like the precious diamond.

‘‘This, to me, is a special appreciation to our most precious asset – our people. Everywhere you go, Nigerians are sparkling like diamonds in the pack, whether in academia, business, innovation, music, movie, entertainment, fashion, and culture. Furthermore, the neatly encrusted diamond on the Nigerian Map symbolizes our age of treasure, the worth of the Nigerian people with our sparkle to the admiration of the world.

‘‘In the same vein, the pear green and dark green colours should respectively remind us of our warmth, welcoming spirit and love as well as the abundant wealth inherent in our human capital and the richness of our land. All these properties make us unarguably the most prosperous black nation in the world and Africa’s largest economy,’’ he added.