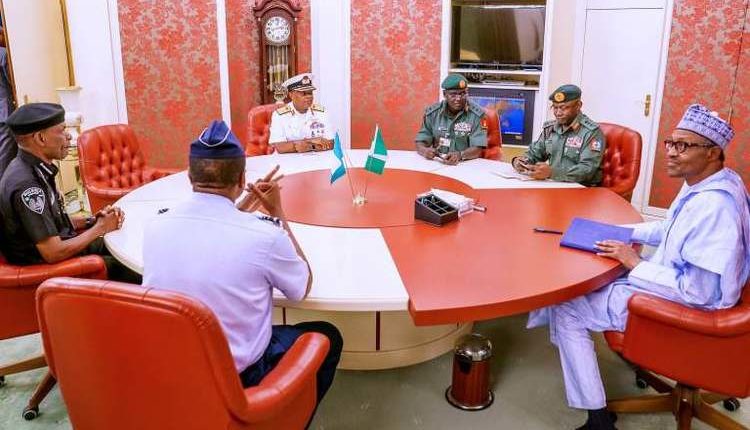 President Muhammadu Buhari has turned down senate recommendation advising presidency to lay off Service Chiefs and restructure security formations so as to have a befitting outfit as against alleged underperformance of the chiefs.

Buhari indicated that his office has the right for appointment and retaining of any appointee and that relieving any officeholder from duty can only be determined by his office.

Through a statement released on Tuesday by his Special Adviser on Media and Publicity, Femi Adesina, the president acknowledged the senate’s recommendation but technically took a different position against the lawmakers’ resolution on the service chiefs.

Buhari assured that his administration would continue to operate in interest of the country and her citizens, just as he reiterated his commitment towards provisions of adequate measures to protect lives and property.

The statement said: “The Presidency notes the resolution, and reiterates that appointment or sack of Service Chiefs is a Presidential prerogative, and President Muhammadu Buhari, in his capacity as Commander-in-Chief of the Armed Forces, will do what is in the best interest of the country at all times“.

Earlier, lawmakers at upper chamber of National Assembly called for the sacking of service chiefs and total overhauling of security apparatus.

This, they argued, had become imperative following the alleged resignation of some soldiers and over 200 others who deserted the battlefield in the ongoing fight against insecurity in the country.

The lawmakers’ recommendation followed the consideration of a motion titled: “Rising casualties among Nigerian soldiers and other security agencies” moved by the Chairman, Senate Committee on Army, Senator Mohammed Ali Ndume (Borno South).

They argued that the recommendation to sack the service chiefs was to ensure an investigation into the cause of the incessant killings of soldiers in the battlefront and also urged the government to urgently intensify the provision of modern equipment to enhance the armed forces’ operational capabilities.

The Senate also mandated the Joint Committees on Army, Navy, Air Force, Police, Defence, and Interior to receive briefings on the state of affairs of the services.

On his part, the Senate President, Ahmad Lawan, mandated the committee to investigate the incidence of 200 soldiers who deserted the battlefront.

“The spirit of this motion is that our armed forces are trying very heard. The good is still not enough. We need to continue to encourage and provide for them. They lay their lives on behalf of all of us and it is very sad that some of them have deserted the war front.

“This our joint committees should get to the root of about 200 soldiers who have deserted. And my condolences to the families of the fallen heroes,” he said.