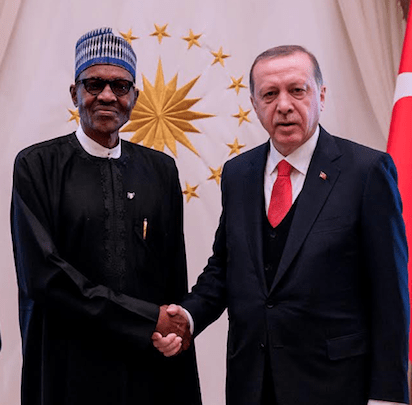 President Muhammadu Buhari and his Turkey counterpart, Tayyep Erdoğan. had a lengthy conversation on the insurgency and the humanitarian crisis that had crippled development in the northeast regions of Nigeria.

During the telephone conversation between both leaders, they also discussed the need to strengthen the existing bilateral relations between both countries that had been in existence over the years.

Confirming the conversation between them on Saturday, the Senior Special Assistant to the President on Media and Publicity, Garba Shehu, disclosed that they met on phone yesterday and that the meeting afforded both leaders the opportunity to express their satisfaction over the existing bilateral ties.

Shehu, in a statement made available to newsmen, noted that his principal, during the conversation, expressed satisfaction with existing bilateral ties between the two countries and called for greater Turkish participation in the economy and the humanitarian efforts in the Northeast.

The statement read in part: “The President used the occasion to, on behalf of himself, the Government and the people of Nigeria, extend a sincere message of goodwill and felicitation on the important occasion of Eid-el-Fitr to President Erdoğan and the people of Turkey.

“President Buhari expressed gratitude to Allah for sparing our lives and granting us the ability to perform the important obligations of the month of Ramadan.

“The two leaders expressed their earnest desire for peace and stability to reign in the world, and for an end to all ongoing conflicts as well as the COVID-19 pandemic”.

Just In: Buhari leaves for France ahead 2021 African Finance Summit