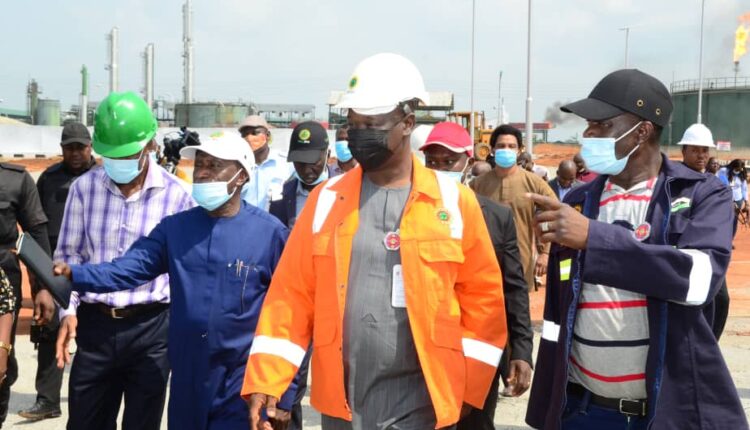 The project, NNPC explained, would aid Nigeria’s quest to attain effective utilisation and commercialisation of its massive gas resources for both domestic and international trading.

The NNPC Managing Director, Engr. Mansur Sambo, said that the facility was owned and constructed by the Nigerian Petroleum Development Company (NPDC), the Upstream Exploration and Production subsidiary of NNPC.

Briefing newsmen yesterday during pre-commissioning tour of the facility, Sambo, hinted that the project was executed after over two million man hours with zero casualty of workers.

According to him, the project will ensure the easing of gas traffic being experienced in Lagos and other congested areas across the country.

“This is a project that will bring a significant change to our incomes in NPDC, and to the environment because we are taken away substantial amount of gas that would have been flared

“We are doing commissioning tomorrow and we have already started operation by selling in earnest. So we want to be ahead of our competitors by making the environment more conducive for our customers because before now, gas lifting was from Lagos and this will be ease the gas traffic congestion we have in Lagos.

“Because of the new IGHF dispensing unit one could easily load a tanker from Benin and deliver it to Abuja or other distant places noting that this would naturally bring down the cost of cooking gas in the country,” he said.

On the issue of gas flaring, Sambo said that NPDC has drastically reduced its percentage to a minimum level below the national average of about nine percent.

He added that the new facility and its strategic location would force down the price of LPG in Benin and that its affordability would augment government’s aspiration to make LPG a preferred domestic fuel source.

Furthermore, Sambo said that the facility was expected to impact on Nigeria’s power sector and domestic LPG market, in addition to progressing the fortunes of its host communities.

He added that no fewer than 350 skilled and unskilled personnel would benefit from the facility during such times when full operation commences.