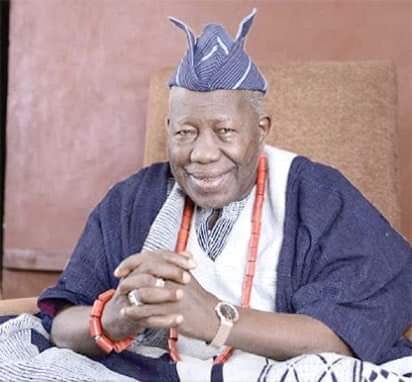 President Muhammadu Buhari, the National leader of the All Progressives Congress (APC), Bola Tinubu, a former Vice President, Atiku Abubakar, the Ooni of Ife, Oba Adeyeye Ogunwusi, and others have described the demise of the Olubadan of Ibadan, Oba Saliu Adetunji, as a big loss for the state and Yoruba race.

Others that have consoled with the Adetunji family and the entire Ibadan, Oyo State capital after the monarch’s demise include the Emir of Ilorin, Kwara State, Ibrahim Sulu-Gambari, and Osun state governor, Gboyega Oyetola.

They spoke separately on Sunday after the nonagenarian monarch, who passed on at the University College Hospital (UCH) after a brief illness, was laid to rest in Ibadan, the Oyo State capital.

Consoling the Oyo state governor, Seyi Makinde, and every Ibadan indigene over the monarch’s death, Buhari stressed that Adetunji was a visionary and compassionate leader that would be missed by all.

The president, through a statement by his Special Adviser on Media and Publicity, Femi Adesina, said: “the late Kabiyesi was a visionary and compassionate leader, who used the spheres of his influence as a respected traditional ruler and a lover of the creative industry to advance the progress of his people, encouraging and motivating them to give their best in their vocation and to the nation.

“While his demise understandably leaves a huge void to fill, the President urges the people of Ibadan and Nigerians from different walks of life to honour the eternal memory of the deceased by imbibing the virtues he cherished so much: generosity, peace, tolerance, and devotion to unity.

Tinubu expressed sadness over the death of the monarch, saying coming shortly after the death of another top-ranking traditional ruler in Yorubaland and precisely in Oyo State, it’s a big loss for the state and Yoruba race.

He described the late Oba Adetunji whom he said he had a personal relationship with as “humble, humane, mature, calm and decent, always a symbol of unruffled dignity.”

In a condolence message released by his Media Office and signed by Tunde Rahman, the APC national leader said: “I received the news of the transition of the highly-referred royal father, the Olubadan of Ibadanland, Oba Adetunji Saliu, Aje Ogungunniso I, with sadness. Kabiyesi passed on at the ripe age of 93, which we are extremely grateful to God for. But this demise has robbed us of his wisdom and wise counseling.

He never withheld his deep insights and rich perspectives from those who sought his guidance. Particularly coming shortly after the death of another top-ranking traditional ruler in Yorubaland and precisely in Oyo State, this passing truly rankles. The late Olubadan was a sage. He was humble, humane, mature, calm, and decent, always a symbol of unruffled dignity.

“Before he mounted the throne, Oba Adetunji had made his name as a successful businessman and music and entertainment promoter who contributed a lot to uplift the careers of many top musicians in the land, thus contributing his quota to the growth of our country’s economy.

“On the throne, the late Olubadan worked assiduously for peace and stability of not only Ibadanland, Oyo State, and Yorubaland, but also the entire country. He superintended over the ancient city with even-handedness.

“I had a close personal relationship with Kabiyesi and I will deeply miss him. My condolences to his family, particularly the Oloris, Mogajis, and the princes. May God Almighty comfort them.

The former Vice President, Atiku, described Olubadan as “a wise man of age whose counsels and fatherly posturing brought a lot of admiration to traditional institutions.”

Atiku condoles with his family, Oyo State Council of Obas and Chiefs, and the people and government of Oyo State for losing two highly-rated traditional rulers in quick succession within a month.

The statement further urges the immediate family of the Olubadan to take solace in the remarkable life that the monarch lived and prays that God shall grant the late Olubadan a peaceful repose.

Extolling Oba Adetunji’s virtues, described the late Oba Saliu as a great monarch whose reign would forever be remembered for the tremendous development brought to Ibadanland in particular and Nigeria at large.

“Kabiyesi Olubadan did not let the features of old age hold him back during his lifetime as he was active in projects, programmes, plans, and other activities towards making life better for his subjects. That is why his return home would be missed greatly by all.

“Though it is a tough way to start the year, we must submit to the will of the Almighty Olodumare for the life of Oba Adetunji which was well-spent serving humanity.

“Our thoughts and prayers in the House of Oduduwa are with natives as well as residents of THEM ancient city of Ibadan and the entire Oduduwa race globally at this material time.” The Ooni said.

In the same vein, Ooni Ogunwusi had earlier in December last year described the Soun of Ogbomoso, Oba Oladunni Oyewumi, Ajagungbade III, and the Olowu of Owu, Oba Adegboyega Dosunmu, who recently joined their ancestors as monarchs who added values to the larger House of Oduduwa.

Ooni Ogunwusi explained that the trio of Soun, Olowu, and Olubadan led administrations of growth and all-around development in their respective domains during their reigns. Adding that history will forever be kind to them across the Oduduwa race.

Sulu-Gambari commiserated with people of Ibadan over the demise of the Olubadan of Ibadan land, Oba Saliu Adetunji, who died on Sunday, January 2, 2022.

Sulu-Gambari, in a condolence message issued by his Spokesman, Mallam Abdulazeez Arowona, condoled with the immediate family of the monarch over the great loss.

According to the statement: ” His Royal Highness, Alhaji Ibrahim Sulu-Gambari CFR, the Emir of Ilorin and Chairman Kwara State Council of Chiefs, hereby commiserate with the Olubadan-In-Council, families, friends, government and good people of Oyo State over the death His Royal Majesty, Oba Saliu Adetunji who passed away today.

“The deceased was known for his patience and commitments to the growth and development of Ibadanland and Oyo State in general since his enthronement to the royal lineage of Olubadan-In-Council and much later when he became the paramount ruler of the ancient city of Ibadan in 2017.”