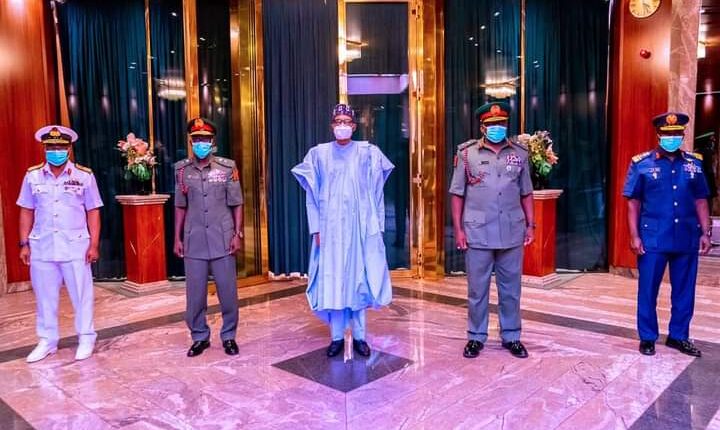 President Muhammadu Buhari has charged the newly appointed Service Chiefs to be patriotic in their duties to the country and to often consider officers’ welfare as paramount.

Buhari added that the country was currently confronted with severe security challenges and that their loyalty as well as, the dedication of their subordinates would be required for the country to get out of its present predicament.

The president gave the newly appointees these charges on Wednesday during a closed-door meeting held at the State House in Federal capital territory (FCT) Abuja which came barely 24 hours after accepting the resignation of their predecessors and announced their appointment.

Buhari, in a statement released by his Special Adviser on Media and Publicity, Femi Adesina, congratulated the Service Chiefs on heading their various services in the country and pledged that all efforts would be made to ensure that equipment and logistics were often provided to ease their duties.

While describing Nigerian security challenges as a country in a state of emergency, he stressed that the security chiefs must be concerned about the morale of their officers and men, saying they should be made to feel physically and professionally secure.

“There is nothing I can tell you about the service because you are in it. I was also in it, and I will pray for you. I also assure you that whatever I can do as Commander-in-Chief will be done, so that the people will appreciate your efforts.