Atiku to declare 2023 presidential ambition before… 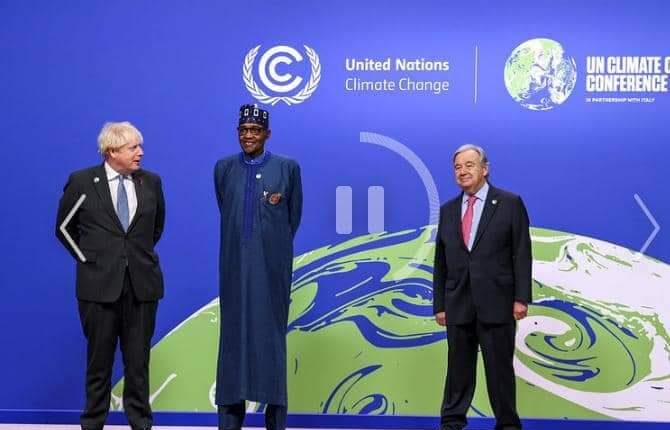 President Muhammadu Buhari has expressed disappointed over what he described as actions and inactions of rich nations across the world which repeatedly go against their promises on action to be taken to address climate change in ensuring cleaner and safer environment for world population.

He argued that with arrays of failed promises from the rich nations, and recent failure of some of the world’s biggest emitters, China, with 11 percent contribution to global warming, and Russia, to appear in person at the COP-26 climate change summit in Glasgow showed that the countries were only about rhetoric and not action to slow down global warming.

The Nigerian leader noted that it was time the black continent refrain from regurgitating commitment to climate change but leave important message to the rich nations of the world that Africa have heard enough of them talking and that it’s high time they walked their talk.

According to him, Nigeria-as did all the countries in developing world -came here to say we are eager to contribute to a greener planet , even though we are, for all practical purposes, non-emitters – Africa on the overall is responsible for a mere five percent of global emissions – we are nonetheless feeling cheated, oppressed and lied to by the rich nations.

Buhari noted that despite the fact that one hundred and twenty Presidents and Heads of government from across the globe came together in Glasgow, Scotland to figure out how to slow down global warming, but disappointingly, China and Russia whom are among some of the world’s biggest emitters were not represent at the summit.

Furthermore, the president criticized the rich countries, the major emitters which brought the world’s climate to this sorry state for making promises toward climate finance that till date, have remained hollow. He told world leaders that the goal of transitioning from fossil fuel to clean energy, reaching a Net zero ambition for green house emission would require critical infrastructure to be in place in developing countries.

“Parties to the Paris Agreement are expected to transition from fossil fuel to clean energy and reach a Net Zero ambition for greenhouse gases emission. We agree that Net Zero ambition can lead to economic transformation across all sectors. It is a good ambition, but it requires critical infrastructure in place, including for renewable energy. Therefore, in Nigeria, it will take us longer time to get to Net Zero,’’ Buhari was quoted as saying in a statement by his spokesman, Garna Shehu, on Tuesday.

Making a case for financial support, the president stated that attaining national and global climate change goals would require adequate and sustained technical and financial support to developing countries. He added that greater efforts should be channeled towards assisting developing countries to meet their Nationally Determined Contributions (NDCs) commitments through the pledges made by the developed countries to provide at least $100 billion yearly.

The Nigerian leader noted that easier access to climate finance had become imperative because of the COVID-19 pandemic, which really battered the economies of developing countries. He regretted that the USD 100 billion year contribution to developing countries signed onto from the Paris 2016 climate change accords, as a promise made by the developed countries, has so far proved to be hollow.

The president, who described the consequences of climate change in Nigeria as devastating, said that his government has responded by encouraging significant investment in renewable energy in the form of hydroelectric and solar projects.

“We have introduced reforms in the agriculture sector to reduce reliance on imports. We have expanded our protected areas by creating ten additional National Parks, and established a 1,500km long green wall across the frontline States to arrest desert encroachment stretching from the Northwest to the Northeast; and we have stepped up implementation of afforestation and reforestation programmes including restoration of coastal/mangrove ecosystem.

“In the area of Energy Access, Nigeria’s commitment to a just transition is reflected in our ambitious Energy Compact, which includes the Government’s flagship project to electrify 5 million households and 25 million people using decentralized solar energy solutions. This is a major first step towards closing our energy access deficit by 2030. We also now have a new law to regulate our hydrocarbons sector.”