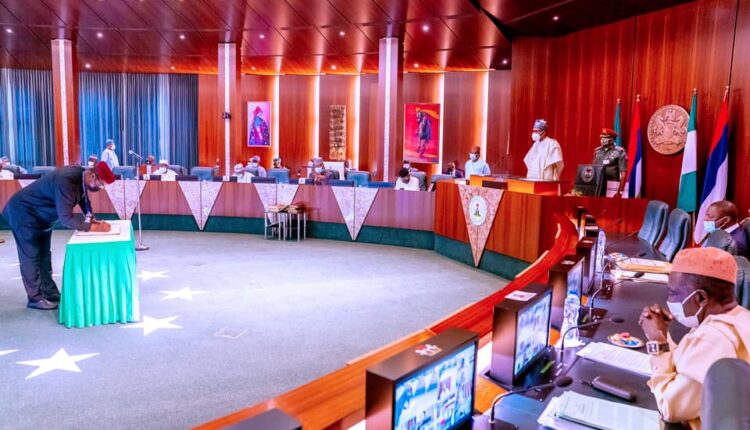 President Muhammadu Buhari has sworn-in new members for the Code of Conduct Bureau (CCB) and the Police Service Commission (PSC), with a charge to be professional and brought bear their wealth experience in their assigned task.

Present at the brief ceremony includes Vice President, Yemi Osinbajo, Secretary to the Government of the Federation, SGF, Boss Mustapha, and Chief of Staff to the President, Prof. Ibrahim Gambari physically present.

The Head of Civil Service of the Federation, Dr. Folasade Yemi-Esan, and other Ministers also joined the ceremony and later the maiden virtual Federal Executive Council (FEC) meeting of the year in the Executive Council Chambers of the Aso Rock Presidential Villa, Abuja, on Wednesday, from their various offices in Abuja.

Chief Onyemuche Nnamani was inaugurated as a member of the Police Service Commission.

Speaking separately with State House correspondents shortly after they were inaugurated, the CBC members maintained that would stop at nothing in giving their best in winning the war against corruption in Nigeria.

Three new members of the Code of Conduct Bureau on Wednesday promised to contribute their quota to ensure a change in the nation’s anti-graft fight.

According to Agbonayinma, corruption is a cancer that needs total eradication, and to achieve this, every patriotic Nigerian must put hands together and support the government of the day.

“Seeing a crime being committed, failure to report that crime to the nearest law enforcement agency, you are as guilty as the man or woman who committed that crime. So, it is going to require the effort of all of us,” he said.

On his part, Balogun said that being a retired police commissioner who have dedicated his life in fighting indiscipline, corruption, and general audacity in society, he would be proactive in helping the anti-corruption drive of the present administration.

“Having been invited over to the Code of Conduct Bureau means this is an opportunity to actualise those things that I have been conceptualising. I will now be in a position to bring these things to the doorsteps of Nigerians that this is how we should conduct ourselves; this is what the law says and by the grace of God, we tend to not just preach it, but enforce it.” he said.