Adeoti is my governorship candidate for authentic APC in…

One custom officer dies during face-off with gunmen in Enugu 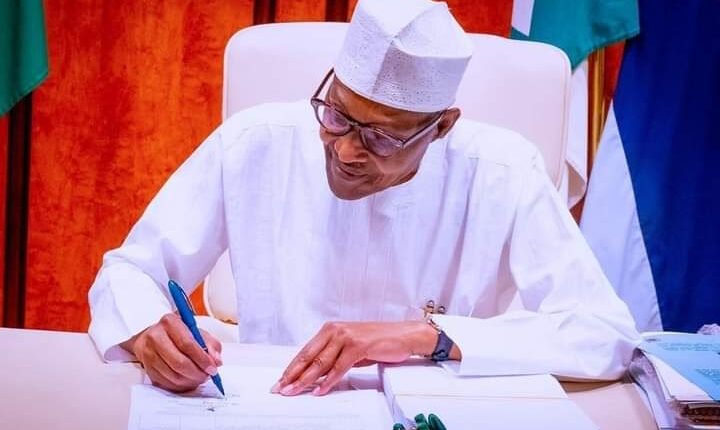 President Muhammadu Buhari has signed the Petroleum Industry Bill 2021 which seeks to introduce changes to the governance, administrative, regulatory, and fiscal framework of the Nigerian oil and gas industry into law.

As stated, the president signed the bill into law on Monday while in quarantine, after his arrival from the United Kingdom.

“The ceremonial part of the new legislation will be done on Wednesday, after the days of mandatory isolation would have been fulfilled,” the presidential spokesperson, Femi Adesina, who announced the development said in a statement on Monday.

Buhari and members of his delegation to the United Kingdom (UK) had gone into isolation to prevent a possible spread of the Delta variant of Coronavirus after a two-week trip to London.

Buhari and his aides were said to have visited the Nigerian High Commission in London and interacted with staff before the Commission’s office was shut after two diplomats were reported to have tested positive for the virus in the country.

The commission has since been shut down and the officials have been mandated to observe the isolation protocol after they had contact with the affected officials during their stay abroad. The president and his aides, like the Commission’s staff, have been mandated to observe mandatory isolation to ascertain if they have a strain of the COVID-19 virus in their blood vessels.

Confirming the development barely two days after Buhari’s return, the Senior Special Assistant to the President on Media and Publicity, Garba Shehu, on Sunday, explained that the move was in accordance with the Nigeria Centre for Disease Control (NCDC) guidelines for international travel.

It would be recalled that after 20 years of deliberations, the Senate and House of Representatives in July passed the much-awaited Petroleum Industry Bill (PIB) into law following a thorough consideration of the over 300 provisions in the bill presented before the lawmakers.

The bill passed by both chambers seeks to introduce changes to the governance, administrative, regulatory, and fiscal framework of the Nigerian oil and gas industry, particularly ensuring transparency, strengthen governing institutions, and attract investment capital, among other objectives to the sector.

According to both chambers, the bill got the input of the executive and legislative arms of government to prevent any further agitations from stakeholders in the sector which the bill seeks to assist in boosting oil production and other activities.

The Senate President, Ahmed Lawan, and Speaker of House of Representatives, Femi Gbajabiamila, who both presided over the plenary separately on July 1, described the passage as a landmark achievement and commended the committees that worked to ensure its passage.