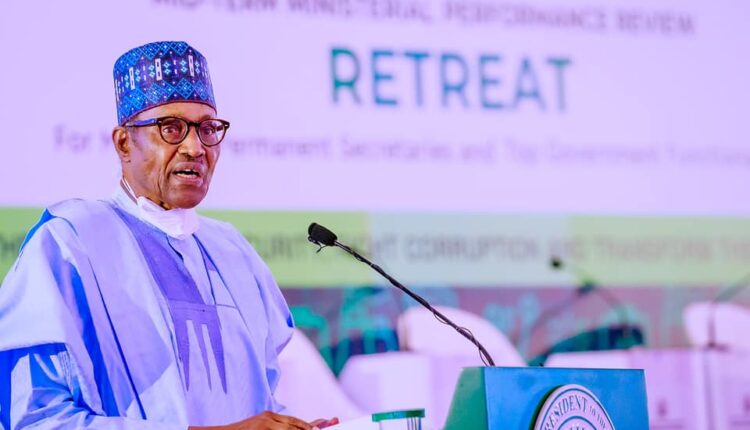 President Muhammadu Buhari has assured Nigerians that the 11.9km Second Niger Bridge, 120 km Lagos-Ibadan Expressway and other key projects under the Presidential Infrastructure Development Fund (PIDF) would be completed within the second term of this administration.

He explained that his administration would stop at nothing in delivering on important critical projects, particularly infrastructural projects such that would directly impact the economy and ensures Nigerians thrive through working infrastructure projects.

The President gave the assurance at the opening of a two-day Mid-Term Ministerial Performance Review Retreat organized to assess progress made towards the achievement of the nine key priorities of his administration. He used the occasion of the retreat, the third edition since the second term of his administration, to highlight some of the Federal Government’s notable achievements in the last two years.

‘‘The PIDF projects are also advancing remarkably. These include the 11.9km Second Niger Bridge, 120 km Lagos-Ibadan Expressway, 375 km Abuja – Kaduna – Zaria – Kano Expressway and the East West Road. Most of these projects are expected to be completed within this 2nd term of our administration,’’ he said.

Buhari expressed delight that over the past two years, ministers have rendered reports to the Federal Executive Council on their activities related to the achievement of their Ministerial Mandates.

‘‘Some of the notable achievements include the establishment of InfraCo Plc in 2020, as a world class infrastructure development vehicle, wholly focused on Nigeria, with combined debt and equity take-off capital of N15 trillion, to be managed by an independent infrastructure fund manager. The Presidential Infrastructure Development Fund was also established in 2020 with more than USD 1Billion in funding.

‘‘In addition, we have launched the Nigeria Innovation Fund by the Nigerian Sovereign Investment Authority (NSIA). This is aimed at addressing investment opportunities in the domestic technology sector: data networking, datacenters, software, Agri-tech, Bio-tech, and more,’’ he said.

Furthermore, Buhari noted that his administration had made tremendous progress on railway projects in the country, noting that upgrading of the railway network is being extended with the recent completion of the Lagos – Ibadan line.

‘‘The Itakpe-Ajaokuta rail line has finally been completed and commissioned after 30 years of its conception. Work is expected to commence very soon on the Port-Harcourt Maiduguri line and Calabar – Lagos Coastal Line to connect the Southern and Eastern States of our Country. Progress is also being made on the upgrading of our Airports, with the state-of-the-art facilities in line with world class safety standards,’’ he said.

On the economy, the president said that the nation witnessed three consecutive quarters of growth, after negative growth rates recorded in the second and third quarters of 2020.

On the Power Sector, President Buhari noted that the implementation of a ‘Willing Buyer-Willing Seller’ Policy has opened up opportunities for increased delivery of electricity to underserved homes and industries.

He expressed the hope that the execution of critical projects through the Transmission Rehabilitation and Expansion Programme, will result in achieving the national goal of improved power supply by 2025.