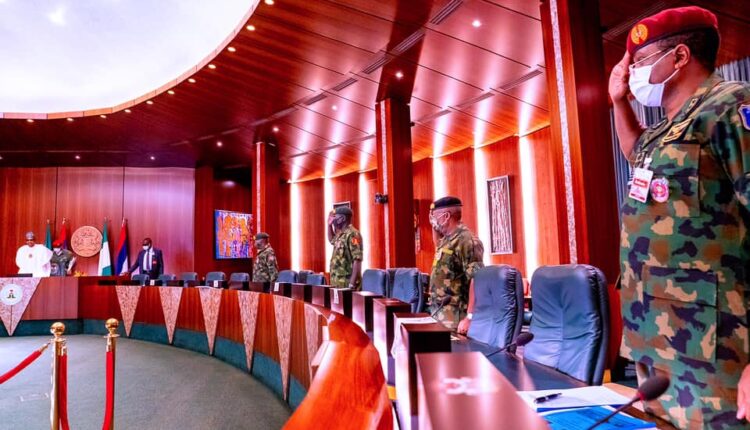 Concerned about recent kidnapping on Abuja-Kaduna highway, President Muhammadu Buhari and the country’s security chiefs are currently meeting to devise possible strategy to curtail kidnappings and end all forms of insecurity across the country.

Among those in attendance are the Secretary to the Government of the Federation (SGF), Boss Mustapha; Chief of Staff to the President, Ibrahim Gambari, Attorney General of the Federation and Minister of Justice; Ministers of Defense Maj. Gen. Bashir  Mahashi (Retd.); Interior, Rauf Aregbesola; Foreign Affairs, Geoffery Onyeama, Police Affairs, Muhammad Dingyadi, and the National Security Adviser (NSA) Maj. Gen. Babagana Monguno (Retd.)

Giving details of the meeting, the President Special Assistant on New Media, Bashir Ahmed, said that the National Security Council meeting was convened to address the recent kidnappings and other sundry insecurities in the country, particularly on the Abuja-Kaduna highway.

Through a post on his social media page on Tuesday, Ahmed said that the President, service chiefs and ministers present at the event would discuss the recent kidnap cases on the highway.

“The National Security Council meeting currently holding at the State House, Abuja, is majorly discussing the recent events on the Abuja-Kaduna highway and other security challenges elsewhere,” the tweet read.

It would be recalled that no fewer than five people were kidnapped on Sunday during gunmen attack on commuters along Abuja-Kaduna highway.