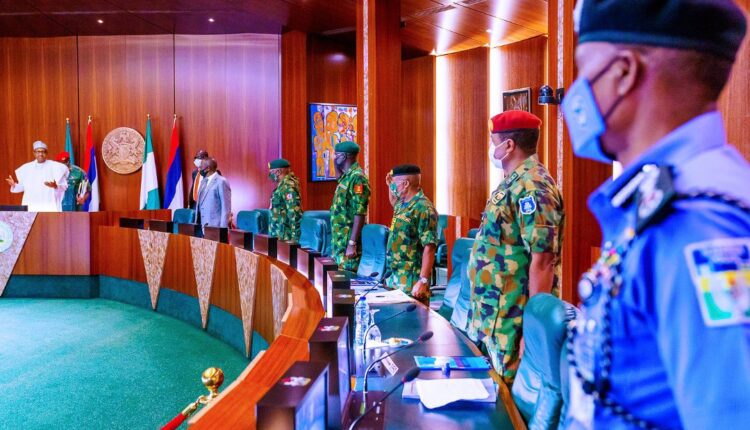 In a bid to address increase in cases of insecurity across Nigeria after Lekki shooting, President Muhammadu Buhari was said to be presiding over the National Security Council in Federal Capital Territory (FCT) Abuja.

Presents at the meeting presided over by the president at the Council Chambers, the State House, Abuja, were Vice President, Prof. Yemi Osinbajo, Secretary to Government of the Federation (SGF), Boss Mustapha, Minister of Defense, Bashir Magashi, Chief of Defense Staff, Tukur Buratai, Inspector General of Police, Muhammadu Adamu and other service chiefs.

Confirming the ongoing meeting on Thursday, Personal Assistant to the President on New Media, Bashir Ahmed, in a statement on his official social media handle, said that the gathering was conveyed to address security challenges in the country.

The Guild gathered that the activities that trailed the military action in Lekki axis of Lagos where over 25 youths protesting against police brutality and seeking reform sustained varying degrees of gunshot wounds and some died, was part of agenda in the ongoing meeting.

He said: “President Muhammadu Buhari is currently presiding over the National Security Council Meeting at the Council Chambers, the State House, Abuja. VP, SGF, COS, Defence Minister, the Service Chiefs, the IG of Police, and other heads of the security agencies are all in attendance”.