Sanwo-Olu identifies empowerment, other solutions to…

Buhari runs to Supreme Being over borders’ security 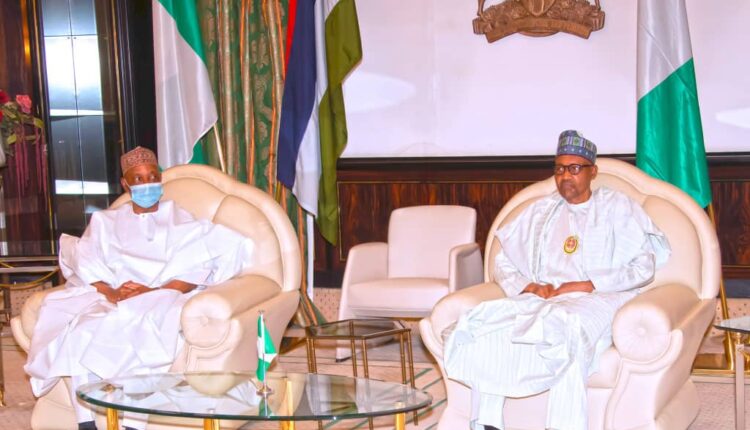 Days after reopening four major borders across Nigeria, President Muhyammadu Buhari has said that protection of the country’s land territories cannot be secured solely by the military and that only the almighty God has power to effectively protect and supervise the country borderlines.

Buhari said that Nigeria shares borders with other African countries including Republic of Niger, and that protecting the country’s territorial lines with communities on the borderlines required God’s intervention.

The president, in a statement by his Special Adviser on Media and Publicity, Femi Adesina, on Tuesday, made the admittance while receiving in audience the immediate former Vice President, Namadi Sambo, who heads Economic Community Of West African States (ECOWAS) Election Mission to Niger.

Through the statement titled, ‘President Buhari pledges support for polls in Republic of Niger, he noted that his experience on border security was garnered from his hometown that was few kilometers away from the country’s territorial lines with Niger.

While receiving the delegation at the State House, Abuja, Buhari applauded his Niger counterpart, Mahamadou Issoufou, for enforcing border security and not attempting to tamper with Constitution of his country.

The president stressed that the Niger leader has shown that he is a true democrat by not elongating his stay in power, after serving for the maximum two terms.

He said: “I come from Daura, few kilometers to Republic of Niger, so I should know a bit about that country. The President is quite decent, and we are regularly in touch. He is sticking to the maximum term prescribed by the Constitution of his country.

“Also, we share more than 1,400 kilometers of border with that country, which can only be effectively supervised by God. I will speak with the President, and offer his country our support. We need to do all we can to help stabilize the Sahel region, which is also in our own interest,” Buhari added.

He pledged that ECOWAS would ensure peaceful and fair elections in Republic of Niger, despite current political, legal and security issues, adding that meetings were already being held with the relevant stakeholders.