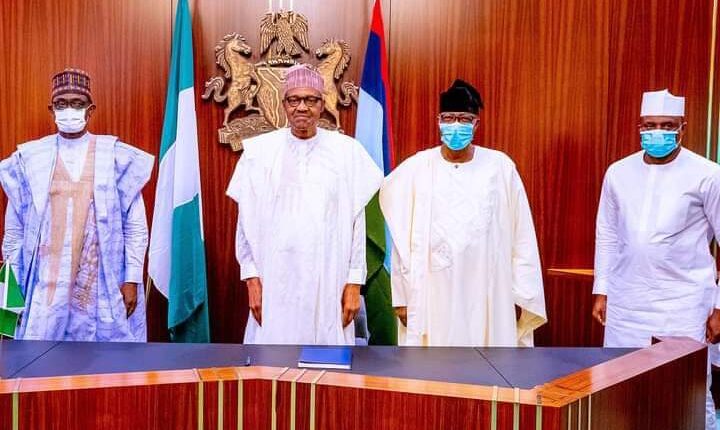 Accompanying the two political gladiators to the Aso Villa in Abuja was the Yobe State Governor and Chairman Caretaker and Extraordinary Convention Planning Committee, Mai Mala Buni, who presented them to the president.

Others at the short ceremony to further usher them into the party on Monday were the Jigawa State Governor, Abubakar Badaru, and his Kebbi State counterpart, Atiku Bagudu.

Daniel was governor of Ogun State from 2003 to 2011, while Bankole was speaker of the House of Representatives from 2007 to 2011, both on the platform of the Peoples Democratic Party (PDP). After few years, Bankole dumped PDP for African Democratic Party (ADP) from where he joined APC while Daniel left the PDP.

Explaining reasons for leaving ADP for APC, Bankole stated that he joined the ruling party to give support to the effort the president was making to bring development across all sectors of Nigeria.

“There are issues we need to solve and any reasonable human being should support at this moment. From Borno to Lagos, Bayelsa to Sokoto, these are critical times and we shouldn’t be found wanting.

“This is the time to step up and support so that these decisions can be taken, executed and owned by us as a nation. Because 10 years from now, 20 years from now, people would ask who stood up when these things were happening? It’s every citizen’s right and all we’ve done is exercise it today. But actions from now will speak for us,” he added.

On his part, Daniel, while explaining why he joined the ruling party, argued that the party gives more options than the PDP.

“Why APC? There are too many options in the party. One thing is sure that we are going through health and economic challenges; we must do less of political contestations and give support,” he said.

“One thing that is for sure is that the entire world is going through challenges that are global challenges: economic challenges, health challenges. And when you are in a situation like this, as I usually opine, we should do less of partisan contestation; all of us must come together to support whoever is in power.

“And what we have decided to do is to come and give our support to the president so that jointly, we can continuously navigate the country.”

Commenting on insinuations that the APC was trying to create a one-party state poaching members of other political parties, Daniel pointed out that the PDP was once in the same position in the country as the then ruling party.

He said: “Definitely any political environment, whether it is multi-party or two-party, there will usually be a majority party and the minority party. So, I don’t think that there’s anything new that has happened. A few years ago, when PDP was at the helm of affairs at the centre, I think the last count out of the 36 states, PDP was in charge in more than 24 states at that time. And the country did not become a one-party state.

Speaking to correspondents after the meeting, Buni said they came to present the new party members to the president who expressed delight at the calibre of the defectors.

Buni said: “We came to present new members of our party, Daniel and Bankole. Mr. President is impressed and happy that leaders of such calibre are joining our party at this time we are registering new members and validating our membership. Indeed, this is the right time for them to join us.”