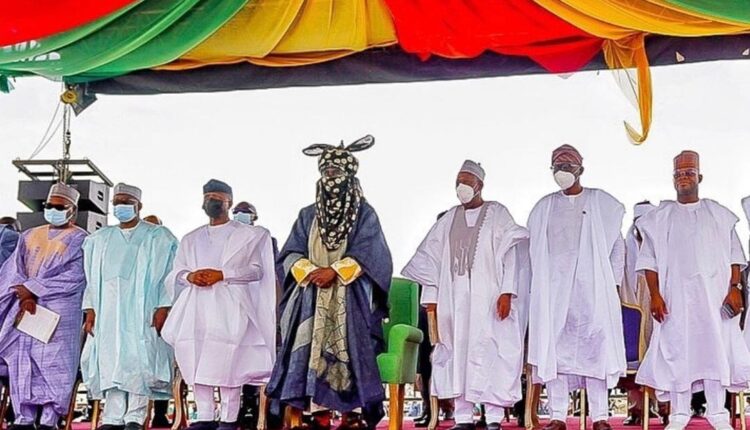 President Muhammadu Buhari has promised traditional rulers across the country that his administration would give them adequate support to leave a sustainable legacy within their domains, just as he charged the monarchs to dedicate themselves to their subjects’ welfare and upliftments.

The president, who gave the assurance during coronation of the Emir of Kano, Aminu Ado Bayero, noted that while his administration has decided to give traditional rulers adequate support, the monarch should replicate the gesture by uplifting their people towards contributing to the country’s development.

Buhari, addressing the crowd that thronged the Sani Abacha Indoor Stadium, venue of the ceremony, on Saturday, meanwhile described the appointment and coronation of the new Emir, Aminu Ado Bayero, as a generational change that would bring development to Kano State.

The president, who was represented by the Vice President, Prof. Yemi Osibanjo, commended the State Governor, Abdullahi Ganduje, saying you have midwifed a generational change of guards.

He said: “It is for me a special privilege to be in this city of proud history of exquisite culture to represent the President of the Federal Republic of Nigeria, President Muhammadu Buhari to witness this historic Coronation of Aminu Ado Bayero, as the 15th Fulani Emir of Kano.”

“Your Royal Highness I need not say to you that this city of Kano is not an ordinary city in both historical and modern times. Kano has always been revered as a major commercial and economic centre in Africa. And a melting pot of diverse tribes and cultures, assimilated into a robust, vibrant, and cohesive whole,” he observed.

“It is only with the tolerance of the culture of Kano where opposite ideas can co-exist peacefully. That you could have a thriving free-market economy, with several Millionaires and yet also be the best of the radical centre left of political ideas.”

“This is after all the city of the socialist man of the masses, Malam Aminu Kano and many of his disciples. And Kano is also the home of the capitalist richest man in Africa, Alhaji Aliko Dangote. From wherever you come to Kano, you must feel at home.”

The President, in a letter read by his Chief of Staff to the President, Professor Ibrahim Gambari, who also coincidentally happens to be an uncle to the Emir, said: “Your coronation and turbanning is providential because it is happening at a time in the history of our country when the prevailing social and political conditions resonate from the ascension of my friend, your late father, the Emir of Kano, Alhaji Ado Bayero. May his soul rest in perfect peace.”

“As I continue to pray for your success and look forward to your contribution to uplifting the people of Kano Emirate in particular, and the nation in general. I wish to assure you of my support for you to leave a sustainable legacy,” he added.

To express his gratitude, the Kano governor charged the monarch to work with the state government and council chairmen to bring development to the Kano Emirate and development of the indigenes.

Ganduje, who described the late Emir, Ado Bayero, who ruled for over 50 years as a promoter of peace and stability, cautioned the newly installed monarch against any utterances that could bring chaos across the state.

The governor, who extolled the virtues of the late monarch, urged the newly installed traditional ruler to inculcate virtues of the former monarch which made him become popular among Kano indigenes.

“Your Highness we are very happy with the way you are conducting yourself and the way you operate in this exalted Emirate. We are witnessing how you are helping the government in many developmental spaces. We are happy with that. We pray that may Allah guide and guard you on this throne.”

Nigerians and their idiosyncrasy