Buhari places over 2m IDPs resettlement, others on priority list 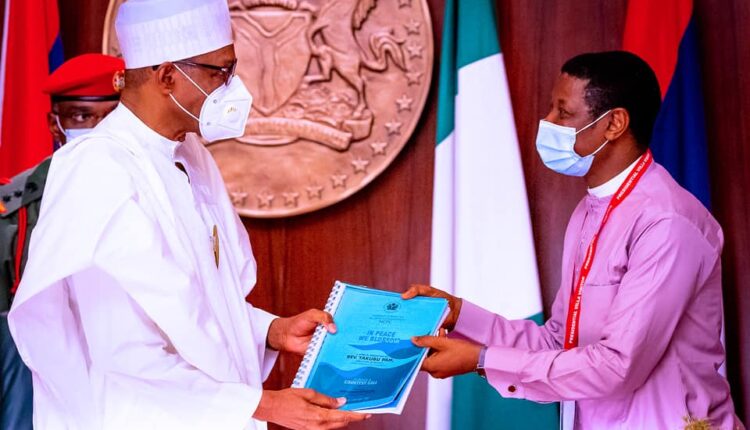 President Muhammadu Buhari has restated commitment to the welfare of Internally Displaced Persons (IDPs) across the country, saying his administration would have achieved more in resettling the IDPs and put up programs and policies that would aid their empowerment before the end of his tenure.

He indicated that he would be using his second term in ensuring return of normalcy that would aid the resettlement of IDPs and refugees through various support and collaboration with relevant agencies and international partners.

The president noted that the IDPs and refugees’ safe return had become imperative to ensure their dignity are restored and feel a sense of belonging in their ancestral homes which they had fled while Boko Haram attacks were consistent in the country.

He added that programmes and policies aimed at empowering the displaced persons and giving them a pride of place in their place of birth would be paramount on the agenda of his government.

“The people in IDP camps, the weak, aged, I feel sorry for the young because this is the time they are supposed to get an education. We must not allow this time to pass because it will never be regained. So we are really interested in what is happening there and we are doing our best,” the president said on Thursday in Abuja when he received in audience the Executive Secretary of the Nigeria Christian Pilgrims Commission, Reverend Yakubu Pam.

It would be recalled that the Minister of Humanitarian Affairs, Disaster Management and Social Development, Sadiya Farouk, recently disclosed that over two million Nigerians have been displaced from their ancestral home and currently seeking refuge in other places across the country.

She explained that their displacement was not unconnected to activities of insurgents and bandits, among other clashes across the country, particularly the nation’s Northeastern region.

Farouk said that many homes and communities across the region have been deserted as a result of terrorist activities in the Northeast, Northwest, and other parts of the country.

Briefing State House Correspondents last week Thursday after leading a delegation to President Muhammadu Buhari at the State House in Abuja, the minister said that though the displaced person figure was disturbing, the apex government was working on modalities to ensure their resettlement.

According to her, the apex government through the Ministry of Humanitarian Affairs had been doing its part with as much as resources at its disposal would permit to ensure the government caters to the needs of all internally displaced persons (IDP) in different parts of the country.

“As of today, we have over two million displaced persons in the country. Ranging from those displaced by insurgency, armed banditry, communal clashes, and so on and so forth.

“The mandate of the ministry is to provide effective communication of national and international humanitarian interventions, ensure strategic disaster education and response as well as to formulate and implement policies and programs geared towards social protection and inclusion of our citizens.

“So, the ministry is doing its best to see that people who are displaced in this country are given the necessary support by way of supporting their livelihoods, rebuild their homes in areas of disasters and settling those who have fled their places seeking for refuge, provided their communities are safe for them to return. This is what we are working and we hope to achieve the desired result”, she said.