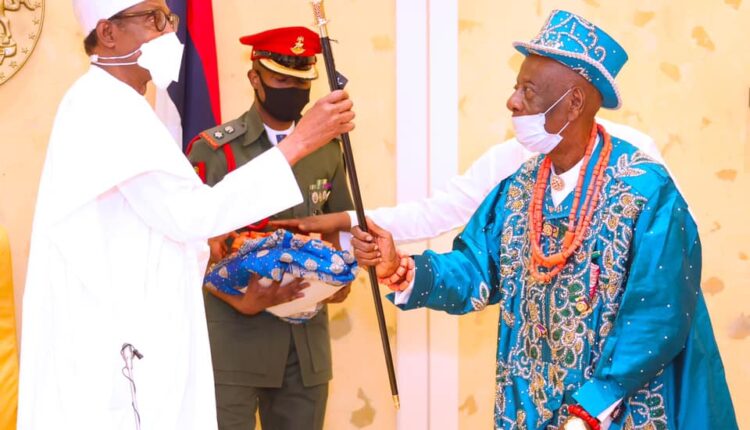 President Muhammadu Buhari has urged Ogoni Leaders to sensitize indigenes on value of protecting national assets like pipelines and other oil installations, saying willful damages usually create more havoc on their environment and hamper development in the area.

The president noted that the Federal Government was committed to the cleaning up of Ogoni Land so that indigenes can regain their lives, return to farms and reactivate economic activities.

“You will need to educate the people of Ogoni Land and the region more that when pipelines are broken, the damage is more to the immediate environment and the people. The majority farmers and fishermen struggle because the fishes now move to the deep sea,’’ he said while receiving some leaders and people of Ogoni Land at the State House Abuja on Friday.

The president said that bad industry practices coupled with security challenges had resulted in massive spills with attendant environmental degradation of Ogoni, leading to agitations and strife. He said that the government would bring to a close all pending issues on sons of Ogoni Land.

“Your Royal Highnesses, distinguished representatives of the people of Ogoni Land, I note the need to ensure completion of segment of the East-West road traversing Ogoni Land, and steps will be taken to ensure delivery under the Infrastructure Development Fund as earlier conceived. We intend to complete this vital artery of Nigeria.

“Furthermore, we are committed to ensuring clemency and national integration as part of this Administration’s bid to lay the foundation for genuine reconciliation and bring closure to the issues of Ogoni Land. The unfortunate incidents of the early 1990s leading to the loss of lives of distinguished sons of Ogoni Land and the collateral judicial processes are indelible in our memories. Despite the grievous circumstances, the Federal Government will consider the request for the grant of pardon to finally close the Ogoni saga,’’ Buhari noted.

According to the president, the Nigerian Petroleum Development Company Ltd (NPDC), a subsidiary of the Nigerian National Petroleum Corporation (NNPC), had been granted license to operate OML11, which will stimulate economic activities and integration in the zone.

“To ensure the stimulation of economic activities in Ogoni Land as underpinned by the vast petroleum resources underlying Ogoni Land and neighbouring communities, NPDC, a subsidiary of the NNPC has been granted licence to operate OML11.

“Accordingly, NNPC is hereby directed to engage all host communities, particularly Ogoni people to ensure inclusive processes of oil and gas exploration and production is anchored on optimum involvement of host communities. NPDC will lay a broad-based programme for the emergence of a new Ogoni Land for the benefit of the Ogoni people and Nigeria as a whole,’’ he added.

Buhari said that he was aware of the passage of the Bill on the Federal University of Environmental Technology by the National Assembly and awaits transmission for further necessary action.

“This Administration has placed the rehabilitation of the Niger-Delta as a top priority and has committed a lot of resources to tackle existing problems, including launching a US One Billion dollar oil clean-up exercise to reverse the terrible damage and restore the ecosystem.

“I am pleased that the restoration and amelioration activities under the auspices of the United Nations and the vehicle of Hydrocarbon Pollution Remediation Project, has commenced work since we assumed office as we promised.

“We will take further steps to ensure faithful and speedy execution of the project so as to restore the environment and enable farming and fishing activities to resume in the affected areas,’’ he added.

The President also appreciated the leaders for recognition of the Federal Government’s efforts to clean up the area and stimulate more economic activities. “Your Royal Highnesses and very distinguished people of Ogoni Land, I thank you very much for your kind words and recognition of efforts made by our administration to bring progress to your part and all parts of the country.’’

In his remarks, the President of the Supreme Council of Ogoni Traditional Rulers, King Godwin N.K. Giniwa, thanked the president Buhari for various interventions in the area, particularly on clean-up of the environment.

The paramount ruler noted that the people believe in the unity of Nigeria and the future of every group could only be guaranteed in one nation. He congratulated the President for achievements in critical infrastructure in the country, especially in railways and road constructions, urging more efforts in provision of potable water.