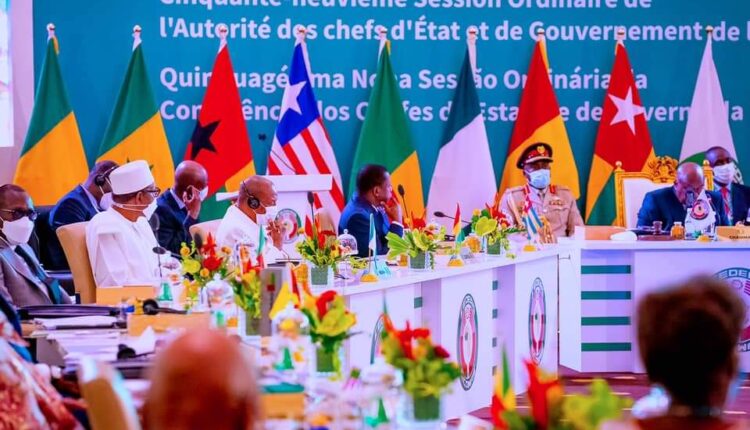 President Muhammadu Buhari has called on other West African leaders to exert pressure on the military leadership in Mali and insists on ensuring that the transition process in the country is not aborted but restored as agreed by all stakeholders involved seeking return to civilian rule.

He added that it was important for leaders from the region to rise up and uphold growing democratic tenets in the sub-regional states already attracting applause from international communities by ensuring the gains are not eroded by recent political crisis in Mali.

The Nigerian leader said that though the recent military coup in Mali had led to suspension of the country from the regional bloc, the leaders must not stop only at sucu sanction but continue to exert influence in ensuring the country returns to democratic rule by exploring all options.

Speaking yesterday while delivering his address at the 59th Ordinary session of the Authority of Heads of State and Government of ECOWAS in Accra, Ghana, Buhari noted that more needed to be done in ensuring political and security situations in the region are brought under control.

According to him, this wummit today, we are expected to review a number of important reports dealing with various issues of concerns to our organisation and people. In doing so, we must take realistic and practical decisions which will positively impact our citizens.

”Some of those decisions, necessarily will have to do with evolving political and security situations in our sub-region as well as evaluate the health of our organisation with the hope of repositioning to serve our people and sub-region better. While democracy continues to develop in our sub-region, recent events in Mali are sad reminders that vigilance remains a crucial imperative to protect people’s aspirations to freely choose the form of Government they want.

”Pressures are needed to ensure that the transition process in Mali, which is half-way to its conclusion, is not aborted. A further slide in Mali could prove catastrophic to the Sub-region, considering that about half of that country is unfortunately under the grip of terrorists,” he said.

The Nigerian leader, therefore, appealed to the military leadership in Mali to understand the critical state of their country, which he described as being ”clearly under siege.”

Noting that the principal responsibility of the military must be to protect and guarantee the sovereignty of the West African country, the president cautioned them not to perpetuate acts that would facilitate the destabilization and destruction of Mali.

”I urge our organization to remain engaged with all stakeholders in Mali through our astute Mediator, former President Goodluck Jonathan, who, I congratulate warmly, for his untiring efforts thus far. I encourage him to sustain these efforts to ensure that the transition is completed as scheduled,” he added.

On Libya, president Buhari faulted the recent United Nations Resolution to expel all foreign fighters in Libya, without first ensuring that they are disarmed and non-collaboration with regional stakeholders.

”On the security situation in the region, our organisation must note with serious concern, the recent decision by the United Nations and its Resolution to expel all foreign fighters in Libya, without first, ensuring that they are disarmed and that neighbouring countries and the Sub-regions were engaged, to put in place modalities for containing or managing the movement of these fighters.

”While this action was aimed at bringing about sustenance of peace in Libya, non-collaboration with regional stakeholders on this critical decision, has now created newer threats to peace, security and stability in the region, which could lead to lack of coordinated management of huge humanitarian crisis across the Sahel, North, Central and West Africa, including the Lake Chad region,” he said.

Reiterating that these regions face the clear possibility of instability with the invasion of the foreign fighters that are fully armed, the President said:

”It is imperative that ECOWAS leaders, at this Summit, decide how the UN-Sub-regional organisations partnerships should be reviewed to address the dangers that this UN Resolution poses to the region.”