Buhari orders military to change tactics against B’Haram, kidnappers, others 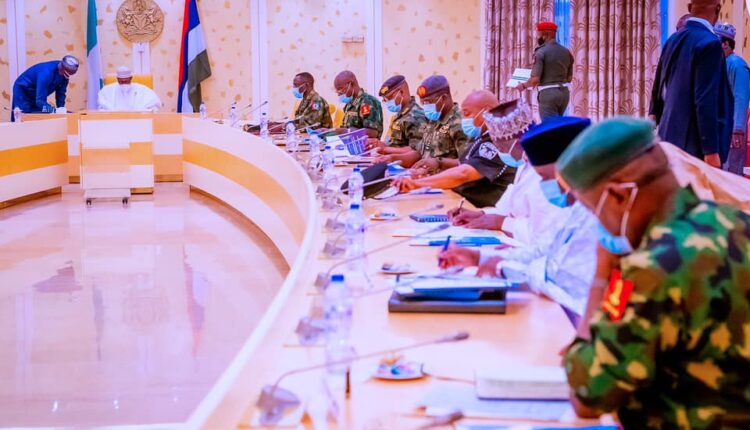 President Muhammadu Buhari has directed Service Chiefs to change their tactics against Boko Haram, kidnappers and others terrorizing the country, saying it was important the nation review its anti-terrorism strategies and employ those that can address insecurity challenges in Nigeria, particularly the northern region of the country.

He said that with the recent gains recorded against the terrorists, it was important the security chiefs rejig their formations and strategies and ensure the terrorists were root out of the country and normalcy returns to the affected places.

According to him, the security chiefs must reinvigorate their efforts, which are yielding results in the northeast, southeast, but there is more to be done in the northcentral, northwest, where people are worried and schoolchildren and students are abducted, selective abductions and killings are done and this narrative must change

The Minister of Defense, General Bashir Magashi, who briefed State House correspondents after the meeting that the government reviewed the situation in the country and concluded that it can resolve the security challenges, especially in Zamfara State and the North Central,

He said that the president also reiterated his marching orders to the security chiefs saying, “The new marching order is that all the service chiefs and intelligence chiefs have been warned to go and reinvigorate efforts and to do more so that the north-central and Nigeria at large should enjoy better security.”

The minister added that Buhari reiterated his administration’s commitment to safeguard the lives and property of all citizens irrespective of their socio-economic status in the society.

“This meeting was called in order to keep the C-in-C abreast on the current happening in the Northwest and Northcentral, in respect of the improvements, problems and any other thing associated with the insurgency, banditry, kidnapping and the rest of it.

“From the meeting, we believe that the spate at which these things are happening in Zamfara State and Northcentral is a source of concern to the government and to all agencies that are responsible for the execution of the operations in the Northcentral.

“We discussed the need for urgency in our dealing with the bandits. We believe they’re becoming a nuisance; killing people, they are doing what they like, they make careless statements, they say what they think they should say in order to solicit the kind of audience they want from the society.

“We believe that we have gone a long way in keeping this country together. If one looks back, prior to our coming, 2014, you’ll find that there’s a lot of improvement, but people are not seeing it anymore. They believe probably we are incapable or there is something which we don’t know, but we are trying to find out why people are not appreciating the efforts of government.

“We have appraised our position, we’ve found that we are capable, we can do this thing, but we need the cooperation of every Nigerian in order to ensure a free society. “Security, as far as this country is concerned, is the paramount important thing in this country, without security, nothing will happen and the Commander in Chief has emphasised this today that without security, nothing can go.

“So, he has directed us to find ways, tactics and style with which we can get out of this and we assured him that we’ll do our best to ensure the mission is successful and we’ll do all we can to ensure the completion of this mission, especially when equipment and other things are available to support the course of our tactical manoeuvres and that we’ll do very well from now,’’ he said.

On the newly acquired Super Tucano fighter jets, the minister said that the jets were being tested while additional six of the fighter jets would arrive Nigeria by the end of September.

He said: “We are just testing them, six are still coming by the end of… maybe next week. So, when the twelve of them are here, I think the Chief of Air Staff will brief you on the operations that they are to undertake as soon as possible.’’