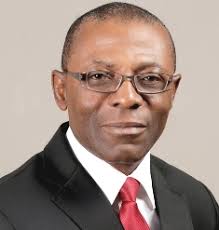 President Muhammadu Buhari has nominated Adolphus Aghughu as the Auditor-General of the Federation (AGF).

Adolphus, who has been on acting capacity since October last year, following the retirement of  Anthony Mkpe Ayine, hails from Edo State.

According to a statement by Senior Special Assistant to the President on National Assembly Matters, Senator Babajide Omoworare, Buhari had  forwarded his letter of nomination to the Senate President, Senator Ahmad Lawan.

The Auditor-General-designate holds a Masters in Economics. He is a Fellow of the Association of National Accountants of Nigeria, Member, Nigerian Institute of Management and Associate member of Chartered Institute of Taxation.

He became an Auditor in the Office of the Auditor-General in 1992 and was promoted to the rank of Director of Audit in January 2016.

Also, the President has nominated Barrister Victor Muruako for appointment as Chairman of the Fiscal Responsibility Commission (FRC).