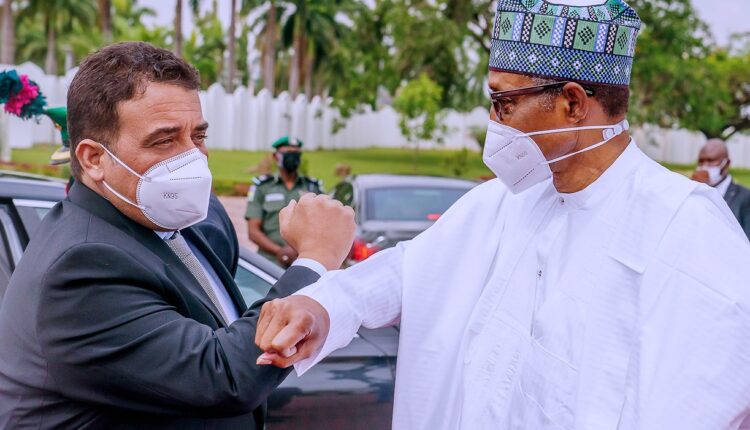 President Muhammadu Buhari is currently hosting the Prime Minister of the Libyan Government of National Unity, Abdul Hamid Dbeibeh, in the Presidential Villa, Abuja, following rising insecurity in both nations.

Dbeibeh and members of his entourage arrived at the forecourt of the Presidential Villa at about 10.05a.m, and were received by President Buhari.

Others who joined the president at the forecourt of the villa included cabinet members as well as some presidential aides. The two leaders are expected to deliberate on bilateral issues meant to benefit and enhance the economies of both countries.

It was gathered that Dbeibeh would use the opportunity of the meeting with the Nigerian leader to console him and people of Nigeria over the death of the Chief of Army Staff, Lt.-Gen. Ibrahim Attahiru and ten other military officers last Friday.

The visiting Libyan leader had on May 25 participated in the Extraordinary Summit of Heads of State and Government of the Lake Chad Basin Commission (LCBC) held at Transcorp Hilton, Abuja.

Meanwhile, Buhari said that stable or unstable Libya has implications for countries in the Lake Chad Basin area, including Nigeria.

The president stated this when he hosted Chairman, Presidential Council of Libya, Mohammed Menfi, at the Presidential Villa, Abuja, on Wednesday. He added that: “Republics of Chad, and Niger, have extensive borders with Libya, and they are our immediate neighbours. Whatever affects them affects us. The stability or instability of Libya will directly affect us.”

He stressed that security of Nigeria was number one priority to him, noting that “unless a country or institution is secured, there’s no way you can efficiently manage it.”

Buhari said that he was happy that the Chairman of the Presidential Council of Libya could personally attend the Summit of Lake Chad Basin Commission held in Abuja on Tuesday, to discuss the situation in Chad and the implications for security in neighbouring countries.

Al-Menfi said that Libya was fast-evolving, and “we now have one government, active on the ground. We are expelling the mercenaries, and unifying the instructions.”

He said that democratic elections would be held in due course, adding that the historical relationship between his country and Nigeria in the areas of oil and agriculture meant that one country could not ignore the other.

“We aspire for joint cooperation, and reactivation of previous agreements,” Menfi said.