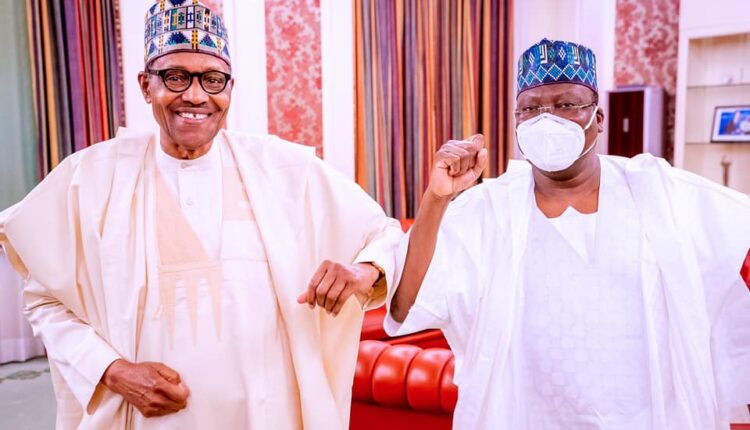 The Senate President, Ahmad Lawan, has met with President Muhammadu Buhari over the rising insecurity in Nigeria, particularly herders, farmers clashes, indiscriminate killings, brewing ethnic clashes among other challenges across the country.

As stated, topmost on the list of what was discussed during the closed-door meeting centered on the recent herders, farmers clashes, ethnic crisis, and rising kidnap of school children in the northern region of the country.

It was also learnt that it was agreed during the meeting that all hands must be on deck in ensuring that the country remains safe for Nigerians irrespective of ethnic, religious or political affiliations.

Briefing State House Correspondents after a meeting with the president in his office at the Presidential Villa, Abuja, Lawan assured that in the next two-month, more would be achieved by the government in securing lives and property of Nigerians.

He added that plans are being concluded to put necessary measures in place in securing all parts of the country and ensure the return of normalcy such that would allow farmers return to their farmlands before raining season.

Lawan assured that the National Assembly under his leadership would work with the other arms of government in upgrading the Armed Forces through relevant policies alongside appropriation for the required equipment and other ammunitions.

“I’ve come to meet with Mr. President, to discuss the issue of security of our nation, and in fact, there is nothing more important today or more topical, than the security of Nigeria.

“We had a very extensive discussion on the security of all parts of Nigeria and how we should go about improving the situation, we all have roles to play. Nobody would like to see the kind of things that we experience in various parts of the country in the form of insecurity.

“As political leaders, we have responsibilities to our people and we cannot shy away from that, we have to get our people secured, we have to secure the environment for them to earn their means of livelihood, we’ll like to see our farmers go back to farms before the rainy season starts.

“This means we have to secure the rural parts of Nigeria as well as the urban centres because we need businesses to flourish. So I believe that between now and probably the next two months, there will be a lot of activities to ensure that we recover and secure the environments for our people to lead a very normal life.

“We also believe that the government is headed in the right direction. You’ll recall that the National Economic Council approved of taking some funds from the Excess Crude Accounts with a view to giving more resources to our Armed Forces.

“This is a commendable effort and we are ready to help with appropriation to ensure that we acquire those security weapons for the armed forces of this country to end this insecurity in the northeast, in the northwest, in the southeast/South-south, and southwest as well.

“We believe that this is also going to help empower and build the capacity of other security agencies like the police because the police need to be there.”