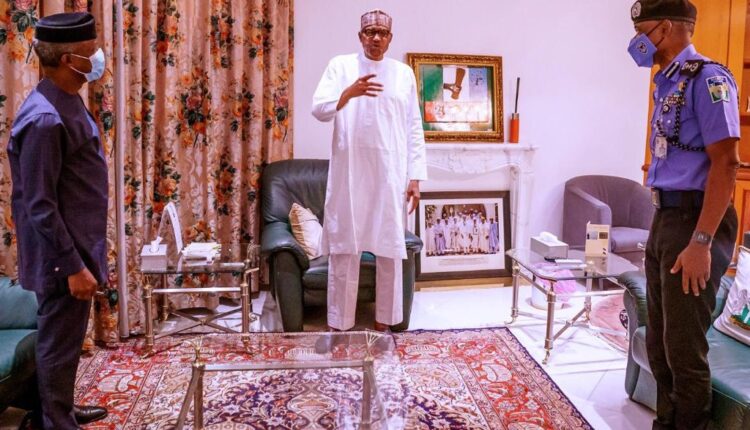 President Muhammadu Buhari has met with the Inspector General of Police, Adamu Muhammad, on police reformation among other initiatives needed to reposition the force for effective service delivery, such that would restore Nigerians’ trust in its operations.

As stated, the meeting became imperative after youths across the country took to streets in demanding outright disbandment of the Special Anti Robbery Squad of the Nigerian Police Force over extortion, brutality, extrajudicial killing of Nigerians by the unit.

It was gathered that discussion during the emergency meeting held in Aso Villa, Abuja, on Friday, was centred on various allegations of brutality levelled against the police force and ways through which the issues could be resolved that would restore Nigerians’ confidence in the force.

Giving breakdown of resolutions reached during the meeting through a series of post on his social media page, Buhari said that he had directed the IGP to address concerns raised by Nigerians by putting mechanism into motion toward ending police brutality and other excesses.

“I met again with the IGP tonight. Our determination to reform the police should never be in doubt. I am being briefed regularly on the reform efforts ongoing to end police brutality and unethical conduct, and ensure that the Police are fully accountable to the people.

“The IG already has my firm instructions to conclusively address the concerns of Nigerians regarding these excesses, & ensure erring personnel are brought to justice. I appeal for patience & calm, even as Nigerians freely exercise their right to peacefully make their views known.

“The vast majority of men and women of the Nigeria Police Force are patriotic and committed to protecting the lives and livelihoods of Nigerians, and we will continue to support them to do their job,” the post read.