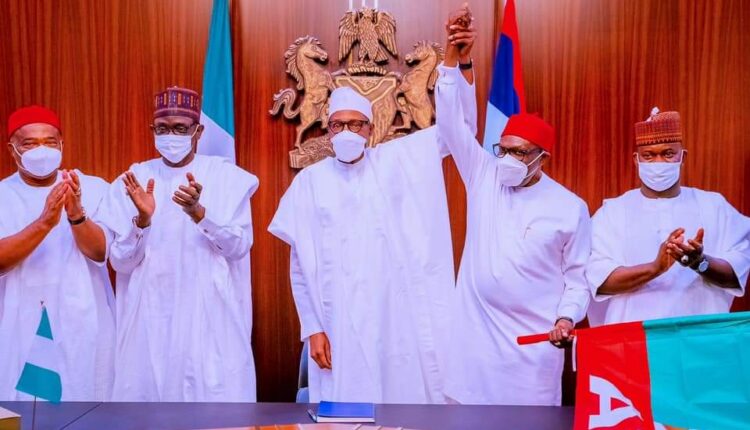 President Muhammadu Buhari has handed over the All Progressives Congress (APC) flag to the party’s candidate for governorship election in Anambra State, Senator Andy Uba, with charge to intensify electioneering campaign towards clinching victory during the poll.

He added that the ruling party’s flagbearer for the election must commit himself to issue-based campaign and explain his plans for the people in lay man’s language to bolster his chances during election.

“I am happy to formally welcome you. I certainly wish you the best of luck. I’m anxious for your success, and will closely follow,” Buhari told Uba when he formally received him at the State House on Tuesday.

The candidate was accompanied to the event by the Chairman, Caretaker and Convention Planning Committee of the party and Governor of Yobe State, Mai Mala Buni, Governors Gboyega Oyetola of Osun, Yahaya Bello of Kogi, Hope Uzodinma of Imo, who is also Chairman, Campaign Council, Babajide Sanwo-Olu of Lagos, Secretary to the Government of the Federation, Boss Mustapha, and Minister for Special Duties and Intergovernmental Affairs, George Akume.

Speaking during the event, Buni said that the APC daily receives new entrants from Anambra State, citing the recent decamping of Senators Stella Oduah and Joy Emodi, adding that “Anambra is ripe for us, and we will work together for victory.”

In his remarks, Uzodinma, as Chairman of the Campaign Council, assured the president that the message of the party would be taken to the people of Anambra, “which will translate to victory for us in November.”

He also thanked the president for making the job easier, “because of the integrity and honour you have in Nigeria. Your name opens doors for us, and lots of people come into our party today because of it.” “By the grace of God, we will be successful,” Uzodinma concluded.