Japanese princess readies for marriage amid $35,000… 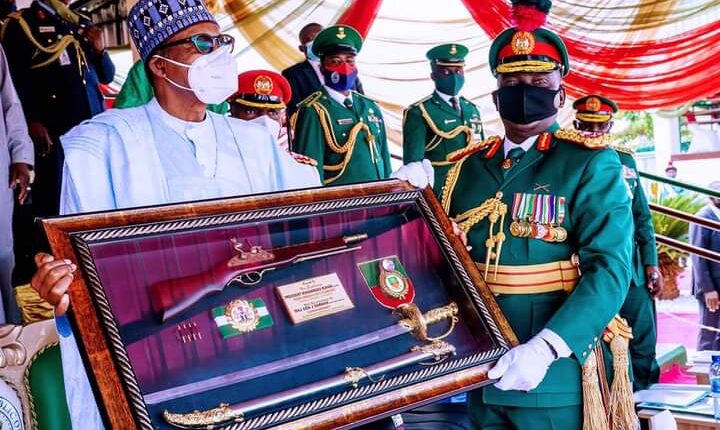 President Muhammadu Buhari has disclosed that the Federal Government would be recruiting more military personnel, improve welfare of officers and introduce additional training activities to assist the personnel’ meet the changing dynamics of security in the country.

Buhari added that the move was to reaffirm the government commitment towards ending terrorism, banditry and kidnapping as well as other security challenges and to protect the territorial integrity of the nation.

The President, who made this known on Saturday during the passing out parade of cadets 67 Regular Course and Short Service Course 46 (Army) at the Nigerian Defence Academy in Kaduna, noted that the government remain focused in tackling any action that could prevent peaceful coexistence in the country.

He stated that the accomplishments recorded in national security was made possible by the untiring efforts of the military and other security agencies, urging the graduates to join their senior colleagues on the field and contribute their quota to the nation’s protection.
“Let me at this juncture, restate our administration’s will to support the operations of the Armed Forces in the defence of the nation. Just recently, I approved the increment of manpower intake into the 3 services in order to cater for the deficit of personnel being experienced.
“Additionally, the Federal Government will sustain the provision of adequate modern equipment, logistics and infrastructure needed to support the operations of the Armed Forces.
“These no doubt will enhance the preparedness of the Armed Forces to meet contemporary security challenges especially with innovations in the field of warfare, Information, Communication and Technology,” Buhari added.

While tasking the newly commissioned military officers to contribute their quota in the ongoing war against the Boko Haram insurgents, bandits, and other criminal elements that are threatening the peace and security of the nation, the president stressed that the loyalty and patriotism of service personnel must be sustained and strengthened.

Buhari said the nation was passing through a time of great need for cohesion, peace and unity, just as he commended the resilience and steadfastness of personnel in the Armed Forces for their professionalism and bravery in tackling the menace of terrorism, insurgency and armed banditry in the North East and North West zones as well as herders/farmers conflict, kidnapping, piracy and communal clashes in other parts of our country.”
Buhari said: “Despite our obvious differences, we must strive to ensure that our actions, and utterances are aimed towards strengthening our democratic framework. We must subsume our personal and sectional interests to the overall national aspirations of unity, economic prosperity and good governance.
“The broad contexts to which these prospective officers will be deployed is complex, fluid and dynamic. Thus, you will have to keep pace with these ever changing challenges”, he added.