By News desk with agency report 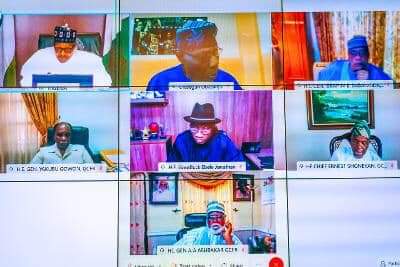 Share
President Muhammadu Buhari has said that no fewer than 69 people were been killed after hoodlums hijacked the protests embarked upon by youths to kick against brutality and extra-judicial killings by dissolved Special Anti-Robbery Squad (SARS), a formation of the Nigerian Police.
Buhari stated that it was unfortunate that the initial genuine and well-intended protest of youths in parts of the country against former SARS was hijacked and misdirected, causing the violence experienced across the country.
The president made the comments on Friday during an virtual emergency meeting with former Nigerian leaders which was conveyed to find ways to end the unrest that had crippled commercial activities across the country.
As gathered, the casualties recorded include civilians and law enforcement officers, policemen and soldiers, that were preventing arson and breakdown of law and order.
While assuring that the ex-leaders that the administration would not allow further breakdown of law and order, even as it had decided to meet the EndSARS protesters demands, the president stated that efforts have been made to ensure that safety of lives and property that existed before the protests were maintained.
Buhari told the meeting, according to agency report, that 51 civilians, 11 police officers and seven soldiers had been killed in the unrest, though, it was not immediately clear whether these figures included the protesters allegedly killed by security forces at the Lekki tollgate.
Aside from the deceased, he stated that in the mayhem that ensued, a number of public and private properties worth millions of naira were completely vandalized by the hijackers.
At the meeting were all living past leaders, including: Gen. Yakubu Gowon, President Olusegun Obasanjo, Gen. Ibrahim Badamasi Babangida, Chief Ernest Shonekan, Gen. Abulsalami Abubakar, and former President Goodluck Jonathan.
The president, in a statement made available to The Guild the president’s Special Adviser to the President Media and Publicity, Femi Adesina, declared: ”We accepted all the demands and proceeded immediately to scrap SARS and started the process of addressing the other demands.
”Unfortunately, the protesters refused to call off the protest and engage the Government to address their grievances. Instead, they became emboldened and gradually turned violent”.
According to him, we will continue to improve good governance through our democratic process including through sustained engagement.
”We shall also continue to ensure that liberty and freedom, as well as the fundamental rights of all citizens are protected. Here, I want to also reaffirm our commitment to preserving the unity of this country.”
The President thanked the former Heads of State for attending the meeting and their invaluable comments, observations and advice, just as he added that Nigerians expect nothing less from responsible statesmen than their wisdom.