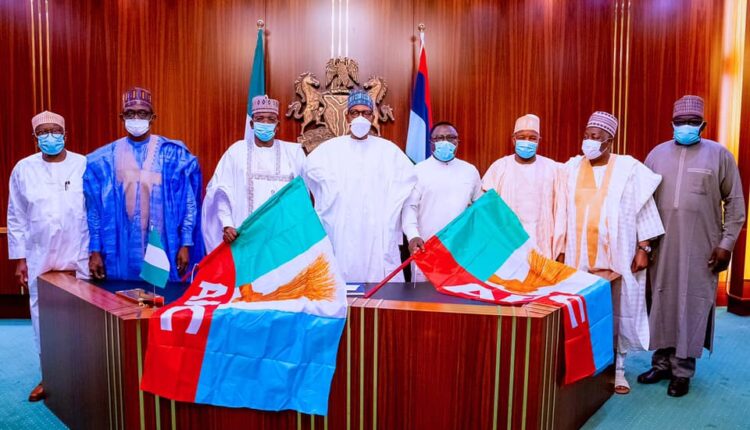 President Muhammadu has commended the Cross River and Zamfara States Governors, Ben Ayade and Bello Matawalle respectively for dumping the Peoples Democratic Party (PDP) for All Progressives Congress (APC), saying their crossover to the ruling party showed their dedication to good governance.

He added that with their defection, the two governors would earn more respect from their constituents, people of their respective states and among political circus for joining the party committed to taking the country to the Next Level.

The president noted that their defection was further testament to the wide acceptability been enjoyed by the ruling party across the country, saying Nigerians had begun appreciating the APC for developmental strides been championed by political office holders elected under the platform.

Buhari receive the governors, who recently left PDP for APC, on Monda at the State House, Abuja. The new APC members, were accompanied to the event by the Chairman Caretaker Committee of the Party and Governor of Yobe State, Mai Mala Buni, Kebbi State Governor, Atiku Bagudu, who is Chairman of Progressives Governors Forum, and Jigawa State Governor, Muhammed Abubakar.

President Buhari while handing the party’s flags to the two governors, said: “This is one of the happiest times for us in this party. For you to have the courage to leave your constituencies speak a lot. I wish Nigerians will reflect on it.

“I congratulate you for leaving your constituencies for our great party. We lost many states at the last election, which is unusual for a ruling party. But we did it to prove that we are a tolerant group. We wanted to demonstrate that we respect individuals.

“We emphasized that we respect our people. That was why we insisted on free and fair elections. Leaders should show honesty and respect for their followers.”

President Buhari added that the coming of the two governors to APC was very important to the party, adding: “To be principled and identify your objectives is a great quality that should endear us to our people. Your people will respect you more for having the courage to come to APC at your own time. Nobody forced you, but you believe it is the best way to serve your people. I value your decision.”

On his part, Buni said that the governors joined APC in appreciation of the good works the president was doing for the country and also announced that ward, local government, and state congresses of the party would start from July 31, 2021.

He said the congresses were shifted for one week because the initial dates clashed with Sallah festivities.