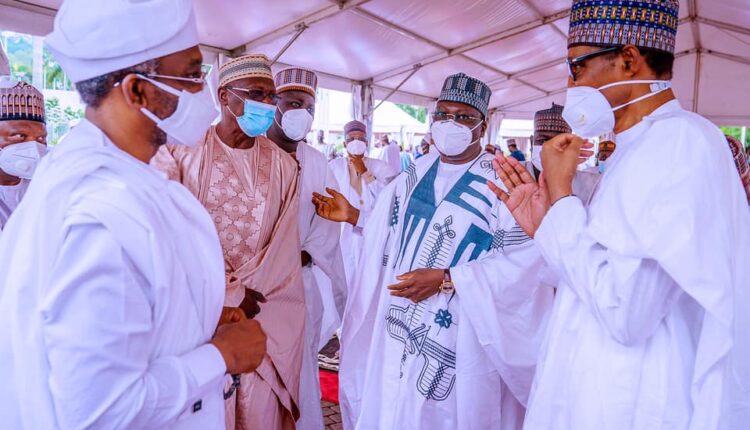 President Muhammadu Buhari has cautioned Governors and political leaders against politicising factors affecting the arrival of the ammunitions procured by the government with the $1 billion withdrawn from the country’s excess crude account, saying, ammunition is not purchased easily.

Buhari stated that rather than criticise the government over the ammunition delay, the leaders should support the military to end the insecurity that affected food production and other commercial activities across the country.

He stated that ammunition that had attracted criticism cannot be procured off the shelves easily and that it often required months before manufacturers can meet requests placed by any country, saying, even after arrival, the personnel must be trained to understand the ammunition.

The President stated these after he, his family members, and the Senate President, Ahmed Lawan, as well as Speaker of House of Representatives, Femi Gbajabiamila, joined other Muslim faithful to observe Eid al-Fitr prayers at the presidential villa in Abuja on Thursday.

Also present at the prayer session were the wife of the President, Aisha Buhari, the National Security Adviser, Babagana Munguno, Minister Of The Federal Capital Territory, Mohammed Bello, were also in attendance, and some of the president’s children and relatives.

At the venue of the prayer session, the Service Chiefs including the Chief of Army Staff, Lieutenant General Ibrahim Attahiru; Chief of Naval Staff, Rear Admiral Zubairu Gambo;  the Inspector General of Police, Usman Alkali Baba; Director-General of the Department of State Services (DSS), Yusuf Bichi and close aides were also present.

Addressing pressmen at the State House shortly after observing the Eid prayer, marking the end of the month-long Ramadan fast, Buhari, who condemned the insecurity across the seven Northeast states, Kaduna, Katsina, Kano, Kebbi, Sokoto, Jigawa,, Zamfara, appealed to the nation’s elite to show a better appreciation of the problems facing the country rather than compound it with their criticism.

“The elite should make the attempt to understand the military. If we order for weapons and armored vehicles, it takes time for the manufacturers. It takes time to ship them and when brought here eventually, they are taken to training institutions, train the trainers before sending them to the field. This is a very long process.
“I expect Nigerians to be more understanding on the issues involved, looking at the time and available resources. For example, when we came in, in the Northeast, ask people in Adamawa and Borno States and the South-South in terms of security. Without security, you can’t do anything. Our big surprise and disappointment is what is happening in the Northwest and we are dealing with it,” said the President with a strong emphasis.

He, meanwhile, assured that his administration will use all available resources and manpower in dealing with bandits to ensure that they did not create havoc against access to farms and food production in the coming growing season.

Buhari emphatically said that the menace of bandits and kidnappers will be addressed to ensure that the nation’s food security is not threatened.

The President, who hoped for a good rainy season this year said “the law enforcement agencies are working hard to regain confidence against bandits so that we can go back to the land. This is very important. This is what the agencies are busy doing right now. We want people to go back to the land so that we can get enough food for the country and even export.”
Explaining ongoing efforts to tackle the security situation in the country by the administration, President Buhari drew attention to the series of long meetings held in recent weeks, chaired by him, saying that a part of resolutions had been made public by the National Security Adviser and the others kept secret.
“With the resources and manpower available to us, we are working very hard. We are hoping Nigerians will understand the problem. Nigerians know at what stage we came in in 2015, what state we are today both on security and the economy and we are doing our best.”
The President commended the National Assembly for its support, saying emphatically that “the National Assembly is cooperating very well. Within the resources available, they are certainly giving us priority on our (military) requests.”

Also, the Chief Imam of the State House mosque, Sheik Abdulwaheed Sulaiman notes that the insecurity challenge in Nigeria is a test from God and is optimistic that unity, peace, and the fear of God will prevail in the country.