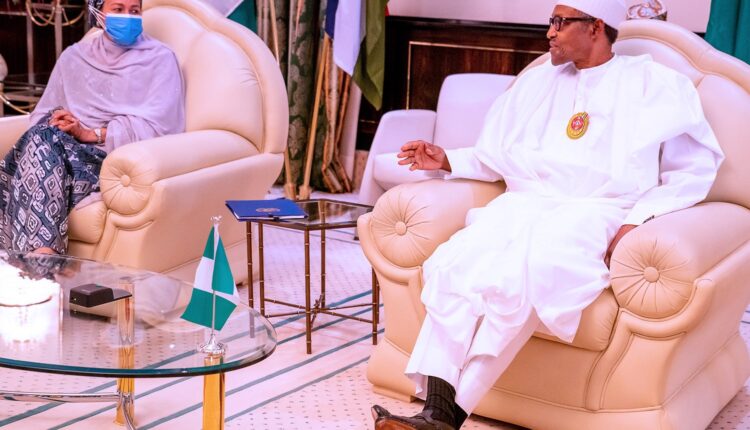 Hours after youths gathered in some parts of Lagos States to protest against police brutality, President Muhammadu Buhari has advised the EndSARS protesters to sheathe their sword and support ongoing plans to address challenges facing the country.

Buhari said that demands made by youths, including employment opportunities, adequate infrastructure, and even development across Nigeria, cannot be actualised when the country is not at peace.

The President stated these on Monday at State House, Abuja, when he received in audience the Deputy Secretary-General of the United Nations, Amina Mohammed, Nigeria’s former Minister of Environment.

Buhari, who was responding to the recent EndSARS protest, and the mayhem and destruction of public and private property that came in its wake, stated that efforts were ongoing to address their demands.

The president argued that his generation was at the twilight of their stay on earth and does not wish to bequeath a failed country to the youths which were why his administration had embarked on several policies including short-term and long-term policies.

According to him, the current administration inherited severe infrastructural deficits and that is what we are fighting to correct. We can’t just sit, fold our hands, and do nothing. We are doing our best within the limits of resources.

To further explain the administration’s efforts to the youths, he noted that his Chief of Staff, Prof. Ibrahim Gambari, and other aides have been dispatched to meet with traditional rulers that would later engage youths within their domains on plans to address their needs.

“It is in the interest of the youths to keep the peace. They want jobs, infrastructure, and development. I have sent a team led by the Chief of Staff (Professor Ibrahim Gambari) to go round the country, talk to traditional rulers, who will then talk to the youths. The views of the youths have been heard,” the President added.

Buhari, while rueing the fact that COVID-19 has shrunk the global economy, noted that the impact cannot be seen, smell, or hear but had wrought devastation on lives and livelihoods globally.

On climate change, he said Nigeria was concerned about the recharge of Lake Chad, which has great implications on security, irregular migration, and livelihoods.

The Deputy Secretary-General said she was on a courtesy call with her team to flag interest in challenges that concern the UN, particularly COVID-19, climate change, security, and humanitarian responses to the diverse challenges.