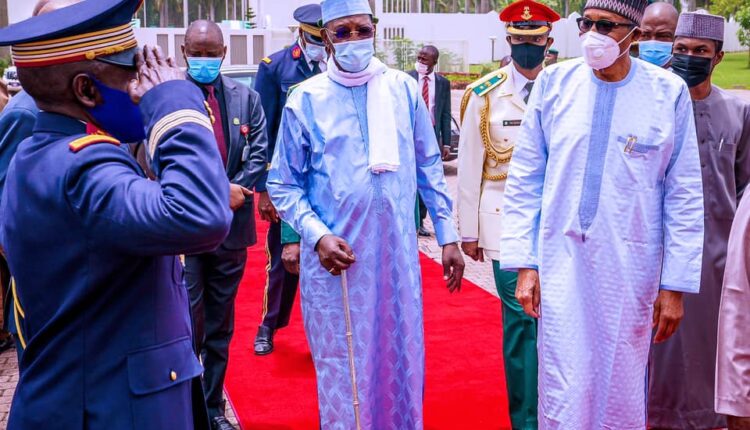 President Muhammadu Buhari has disclosed that the numerous challenges bedeviling the Lake Chad region and its ripple effects rubbing off on other neighboring African regions could only be controlled through collaborative efforts by leaders in the region.

He added that since the challenges were also affecting other neighboring countries, the entire African leaders can not continue to fold their hands in the face of daunting turbulence threatening the continent’s cooperative existence.

Buhari noted that more understanding and partnership among leaders would be needed in restoring normalcy to the region such that would guarantee other neighbors their needed peace.

Speaking on Saturday at the Presidential Villa, Abuja, during bilateral talks with the President of Chad, Idris Itno, said that contributing to the region’s woes was the shrunken Lake Chad which reduced to about ten per cent of its original size with no fewer than 30 million people adversely affected.

According to him, it is imperative that there be water transfer to the Lake Chad from the Congo Basin so that the people can resume their normal lives.

He added that with inter-basin water transfer, farming, fishing, animal husbandry would resume, and curtail irregular migration of youths, who now dare the Sahara Desert and the Mediterranean Sea, to get into Europe, seeking greener pastures.

“I’ve been engaging with the relevant stakeholders in Africa and beyond, on why we need to recharge Lake Chad. Nigeria will benefit more, but it is also advantageous to everyone,’’ Buhari was quoted as saying in a statement released by his spokesman, Femi Adesina.

Furthermore, the president appreciated Chad for its role in curbing insurgency in the region, particularly the Boko Haram challenge.

“We appreciate what you are doing on security. When I first came to office in 2015, I came to see you, as well as leaders of other neighbouring countries, because it makes sense to be in the good books of our neighbours,” he added.

Buhari, however, wished Itno well in the general elections coming up in his country in April. The Chadian leader thanked President Buhari for receiving him, saying, “We are neighbours facing similar challenges.”

He added that he was also around to explore other bilateral issues, in addition to security. On the recharge of Lake Chad, he counseled the Nigerian president to consider convening an international summit to move the idea forward.