Sowore: Soyinka, Falana, others can’t intimidate us to… 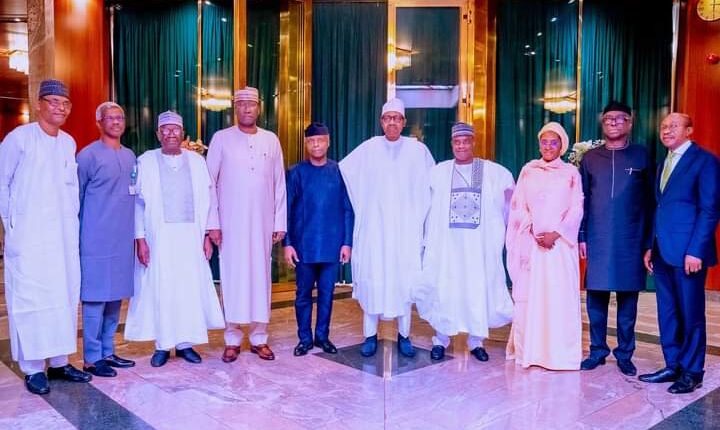 After a thorough review of the current economic challenges facing the country, President Muhammadu Buhari has disclosed that the country would get over its present predicament when crude oil theft has been solved.

Buhari said that the theft has limited the country from achieving its crude oil production benchmark approved by the Organisation of Petroleum Exporting Countries (OPEC), resulting in the nation’s revenue exchange.

He disclosed the solution to the country’s economic challenge on Friday during the inauguration of the Presidential Committee on National Economy which he inaugurated in his office.

While acknowledging the impact of the menace on the nation’s revenue exchange, the President reminded them that production of crude oil owing to economic sabotage has led to a production decline at half the nation’s OPEC quota.

Buhari, therefore, urged members of the committee to tackle the distinct challenges while promising that his administration will work assiduously to reverse the trend.

“Starting with COVID-19 and now the conflict in Ukraine, the past three years have been turbulent ones for the global economy. Global interdependence has become more apparent as we have had to deal with volatility, uncertainty, complexity, and ambiguity.
“In this period, challenges faced by the world have been many including: (i) lockdowns as COVID-19 raged; (ii) disruptions to supply chains around the world; and (iii) sharp fluctuations in prices.
“Just as the world was beginning to recover from the coronavirus, the conflict in the Black Sea region between Ukraine and Russia worsened the challenges already being faced and created additional problems to which policymakers are having to respond. Our economy continues to grow despite the adverse effects of rising interest rates, a stronger US dollar and higher inflation across the world,” he said.
The President noted, however, that some of the problems could be addressed internally, making the constitution of the seasoned economic experts expedient:
“It is however important to note that some of the issues we must address are peculiar to us. For example, the decline in our production of crude oil. It is estimated that last month, August 2022, we produced less than 1mn barrels. The fall in production is essentially due to economic sabotage.
“With the high price of oil in the world markets, producing at about half our OPEC quota has deprived us of much needed revenue and foreign exchange. Government is working tirelessly to reverse this situation.”

Members of the committee include Vice President Yemi Osinbajo who is also chairman of the National Economic Council (NEC), Governor Aminu Tambuwal of Sokoto State who represents the Nigeria Governors’ Forum, and other members of the cabinet.

At the maiden meeting, Buhari defended the nation’s borrowing rate, asserting that it is vital to achieving infrastructural development.

He identified as another source of concern the nation’s resource mobilization (when compared to other countries) which he noted impinges on the nation’s ability to perform.

On the mandate and constitution of the Committee under his headship with representations from State Governors, the President said he is convinced that it will deliver as expected for the benefit of the populace:
“The Presidential Committee of the National Economy, which I am inaugurating today, aims to bring together all policymakers responsible for the economy. In this way, we share a common understanding and approach to resolving the issues I have identified and many more.
“This Committee, will provide our nation an opportunity to be bold, more proactive, and innovative in tackling persistent challenges. The work with which I have tasked the assembled team will enable us respond more swiftly and efficiently.”
Presentations were made at the event by Dr Doyin Salami, Chief Economic Adviser to the President, Zainab Ahmed, Minister of Finance, Budget and National Planning, Otunba Niyi Adebayo, Minister of Industry, Trade and Investment, as well as Godwin Emefiele, Governor, Central Bank of Nigeria.
The Presidential Committee on the Economy is chaired by President Muhammadu Buhari and has as members the Vice President, Professor Yemi Osinbajo; Dr. Kayode Fayemi, Chairman of the Nigeria Governors Forum; Dr. Mrs. Zainab Ahmed, Honourable Minister for Finance, Budget, and National Planning; Otunba Niyi Adebayo, Honourable Minister for Industry, Trade and Investment; and Chief Timipre Sylva, Honourable Minister of State for Petroleum.
Other members include Mr. Boss Mustapha, Secretary to the Government of the Federation; Prof. Ibrahim Gambari, Chief of Staff to the President; Mr. Godwin Emefiele, Governor of the Central Bank of Nigeria and Dr. Mohammed Sagagi, Vice Chairman of the Presidential Economic Advisory Council. The Chief Economic Adviser to the President, Dr. Doyin Salami, is Member/Secretary of the Committee.

The Presidential Committee is expected to review the national economic situation and propose measures to ensure the progress of the nation’s economy, receive regular updates on economic conditions in the country, identify issues that require urgent intervention to improve macroeconomic and fiscal conditions, review the impact of existing and new policies on the Nigerian economy and provide directions to relevant institutions responsible for fiscal, monetary and other relevant policies.