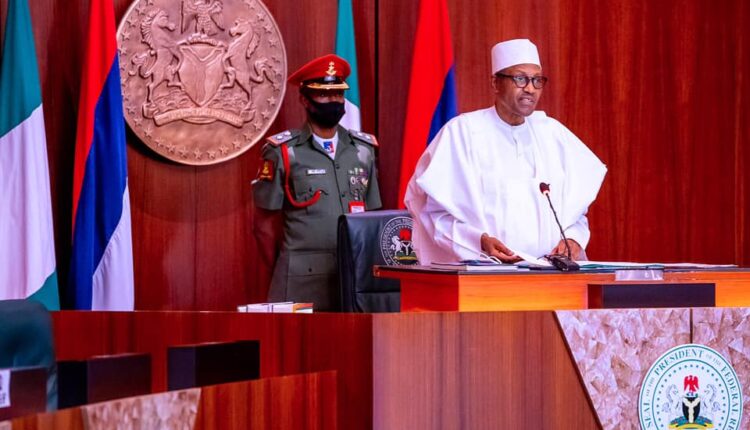 President Muhammadu Buhari has reiterated his commitment to seeing more Nigerian women in leadership positions, both at national and international institutions as part of measures aimed at encouraging younger girls to dream and have in older womenfolk, worthy role models.

He added that aside from supporting women for leadership positions, his administration would ensure that access to credit would be further eased, and more space would be created for women to participate in politics.

The president also singled out women for commendation, saying their invaluable contributions in sustaining the socio-economic fabric of the country, from the corridors of decision making to rural communities, were being felt in Nigeria.

Buhari spoke at the State House, where he received National and International Working Groups of the Supporting Advancement of Gender Equity (SAGE) Initiative to commemorate the 2021 International Women’s Day.

“I am very proud of the achievements of my former Minister for Environment and United Nations Deputy Secretary-General Amina Mohammed, Fatima Mohammed Kyari as the African Union Permanent Observer to the United Nations and the newly elected Director-General of the World Trade Organization (WTO), Dr. Ngozi Okonjo-Iweala.

“We will continue to support them to succeed. And we shall continue to advocate for our women who qualify to lead international fora,’’ Buhari said.

He said that women remain a credible force in strengthening democracy and promoting the culture of peace and food security, adding: “I am most grateful for the role women have played and continue to play in our government.’’

Buhari noted that the theme for 2021 International Women’s Day, “Women in Leadership: Achieving an Equal Future in a COVID-19 World”, calls for more concerted efforts and Nigeria would be more than ever committed to join in raising the bar for women’s representation at all levels.

“This administration has demonstrated this by engaging in intense diplomacy to support the aspirations of Nigerian women to provide leadership on the global stage.

“In the wake of the COVID-19 pandemic and its attendant problems, including the spike in gender-based violence, this administration promptly responded by declaring zero tolerance to Gender-Based Violence in the country.

“I have since directed the Attorney-General and Minister of Justice in collaboration with the Minister of Women’s Affairs to immediately inaugurate an Inter-Ministerial Gender Based Violence Management Committee to address all forms of violence against women and children in the country. This body is already in place and running,’’ he said.

The president also said that he had given approval for 45 percent of the Small and Medium Scale Enterprise Funds to be reserved exclusively for women, while five percent go to other vulnerable groups, apart from the immediate palliatives targeting them.

“We have also expanded our social intervention programs to further address the needs of the most vulnerable women in our society.

“Education of the girl child and the empowerment of mothers are fundamental to achieving an increase in the number of female leaders in the country and our objective of lifting 100 million of our citizens out of poverty in 10 years.

“At the commissioning of the Ministry of Women’s Affairs Headquarters Building in January 2020, I had pledged to address child marriage and boost girl-child education across the country. This is borne out of my concern on the increasing number of out-of-school children in the country. This Government would sustain on-going efforts to address this issue,’’ he added.

Buhari also said that the twin evils of limited access to education and poverty, and gender-based violence remain a strong inhibitor to women’s participation in politics and governance.

“However, our resolve remains unshaken in tackling these issues. Despite the spike of incidents of abduction of school children and other security challenges, this Government remains resolute in its pursuit of a just and credible society devoid of inequities and promotion of the rule of law. Let me assure you all that we remain committed to working with groups such as yours to address these challenges.

“As a leader of the governing party, I will lend my voice to the amendment of the party constitution which is ongoing now and is the entry point for effective and meaningful participation of women in elective offices. Once again thank you for your efforts and support to our women,’’ the President noted.

He assured that the Ministry of Women’s Affairs and Justice would work with the National Assembly to ensure necessary reforms are passed in the ongoing constitutional and electoral reform processes.

In her remarks, the Minister of Women Affairs, Pauline Tallen, commended the president for his support in ensuring that Nigerian women gain more recognitions and positions within the country, and across the globe.

Tallen said that women needed more, particularly in economic empowerment, quality education, and legislation that would favour participation in politics.