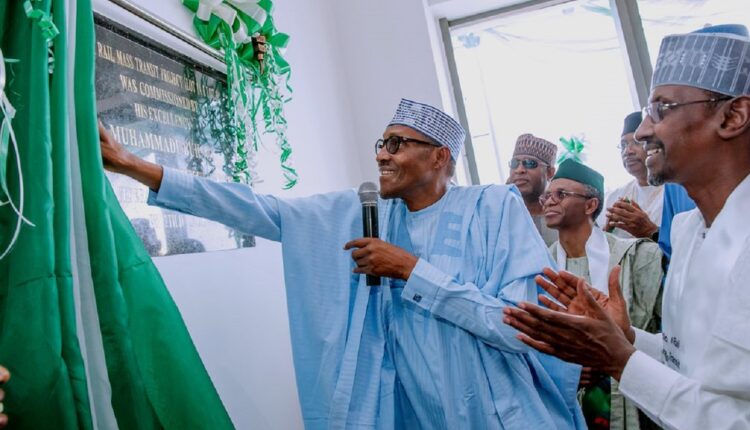 How did you feel watching Works and Housing Minister, Babatunde Raji Fashola, SAN, inspecting the just completed multi-million dollars bridge at Ikom, Cross River State, early this week? Any person of goodwill, not overtaken by bile and ill will, would feel proud to be a Nigerian. Such people would be proud of not just the dynamic Minister, but also of his principal, President Muhammadu Buhari.

Yes, President Buhari is doing great things in the area of infrastructure in the country. Roads, bridges, rail, airports, and the half have never yet been told.

The new Ikom bridge replaces the old steel truss bridge built 50 years ago, in 1971. Located at Eko-Mfum, in Etung Local Government Area of Cross River State, construction began in April 2017, and the project was completed in March, this year.

As Minister Fashola said, that bridge would facilitate business and transportation between Nigeria and Cameroon, and generate employment for people. Money truly well spent, even at times of scarcity.

The new Ikom Bridge, coming after 50 years, is reflective of what President Buhari is doing for the country. He is cracking stubborn projects, initiating some, completing others, and bringing relief and succor to the country.

Just as in Ikom, you have it for the Lagos-Ibadan Expressway. The road built in the 1970s and commissioned for use on August 8, 1978, became decrepit and degraded over the years. The daily toll in terms of loss of lives on the country’s busiest expressway can only be imagined.

Attempts had been made to refurbish the road in 2007, and 2009 through Public Private Partnership (PPP), but nothing came of it. In 2013, the administration of President Goodluck Jonathan awarded the contract, and work began. It didn’t go far till the government exited from power.

Under Buhari, the Presidential Infrastructure Development Fund (PIDF) was energized, and it began to fund critical projects round the country. Lagos-Ibadan Expressway was one of them. The project was augmented to include upgrades like interchanges and underpasses, and the expected completion date is 2022.

As someone that hails from the western part of the country, the Lagos-Ibadan Expressway is my natural terrain. From Lagos to my homestead of Ipetumodu in Osun State used to take me two hours of steady driving. But as the road deteriorated, it became three, four, five, six hours. At a point, you only knew when the journey started, and not when it would end. I’d slept on that road a couple of times, after crashes and gridlocks ensued in the middle of nowhere, with the attendant security challenges. I also lost a sister on the road, a Professor of Dramatic Arts at Obafemi Awolowo University, Ile-Ife. The tears have not dried six years after.

Now, a completely refurbished Lagos-Ibadan Expressway is due for commissioning in months, rebuilt by a Fulani man from Daura, in Katsina State. Are some people not trying to sell the narrative that ALL Fulanis are herdsmen and criminals? What other Presidents from South-west, North-west, and South-south could not do, the so-called cattle rearer from Daura has accomplished. Holy Moses!

The people of Bonny never had a road across the Opobo Channel in Rivers State since the beginning of time, when Adam and Eve lived. The Bodo-Bonny road had been conceived for decades, and many administrations, military and civilian, had come. None was able to build the road. Unsuccessful attempts were made in 1997, 1999, and 2002, to kick off the project, but all failed. Now, the cattle rearer is set to deliver the multi-million dollars road in 2022.

Work began in 2015 under financing cooperation between the government and the Nigerian Liquefied Natural Gas (NLNG), and massive construction challenges are being surmounted. The 39 kilometers long road is being built over swampy terrain and water, with many cross culverts, mini bridges, and creek bridges. Only a leader with the heart of a lion could dare the project. Buhari did, and he would deliver next year, by the grace of God.

The big elephant. Second Niger Bridge. We know the story after the existing bridge was built in 1965. Many governments had attempted to build a second one. For 16 years, three administrations of the People’s Democratic Party (PDP) built it with their mouths. Whenever it was time for elections, they would go to the site with cutlasses and hoes (as if that was what you needed to build a bridge of such magnitude), but after collecting the votes of the people, they retrieved their hoes and cutlasses. Till the next election.

The second Niger Bridge was conceptualized in 2005, an attempt was made to start work in 2014, but it was not successful. In 2016, under Buhari, the project roared to life. Funded under PIDF, the project is expected to be delivered in 2022, that year of massive projects commissioning. A Fulani man has made a difference, where all the others before him failed.

Abuja-Kaduna-Zaria-Kano. Another famished road, where scores of lives are lost on regular basis. The Abuja-Kaduna section was completed in 1996, the Kaduna-Zaria section in 1991, and Zaria-Kano portion, also in 1991. Since then, only minor repairs were done over the years. But under Buhari, rebuilding work commenced in 2018, funded by PIDF, and the main carriageway is expected to be delivered in 2023, and the ancillary components completed in 2025. Only a President who doesn’t pocket the country’s resources attempts huge projects like this.

Over 800 contracts have been awarded for projects by the Works and Housing Ministry around the country, but let’s look at one more stubborn project being cracked. The Apapa-Wharf road, and construction of Apapa-Oworonshoki-Ojota Expressway.

Hmmm. Those of us that used that road for more than a decade, going to work daily in Apapa area of Lagos have stories to tell. Getting to the office was horror, getting home at night was close to hell. Three hours after leaving the office, you were still stuck in craters and ravines, trying to meander your way. How many times were we robbed in the traffic gridlock? In January 2003, robbers fired into my car, the bullet ripped through my clothe, nicked my shoulder, and buried itself in the chest of my co-worker, whom I had given a ride. The life of Bashiru Adeyemi, retired soldier and computer operator in our office, was never the same again, till he died some years later. Due to a bad road, neglected over the years by successive governments.

Now, all the way from Daura, succor has come for Lagosians. After three failed attempts at rehabilitation in 2009, 2012, and 2016, full reconstruction of the road began in 2018. Rigid pavement is being used due to traffic volume and haulage activities to and from the ports. The Apapa-Oworonshoki-Ojota Expressway is expected to be delivered later this year. What a relief it would give.

Amidst all these great works by the self-effacing man from Daura, evil hearts are engaged in war of tongues, saying they do not see what the government is doing. Yes, there are serious security challenges in the country, which are being tackled, but they want to make it seem that only insecurity is the thing happening. The PDP shouts itself hoarse daily, trying to knock off the party that removed its snout from the honeypot in 2015. But why do the heathens rage, and the people imagine vain things? He that sits in Heaven is laughing at them.

As Works and Housing Minister, Fashola is doing great things for Nigeria, under the inspiration and leadership of President Buhari. Many are the projects considered stubborn over the years, which President Buhari has cracked. I am glad the cattle rearer came our way. We will never forget his good works.