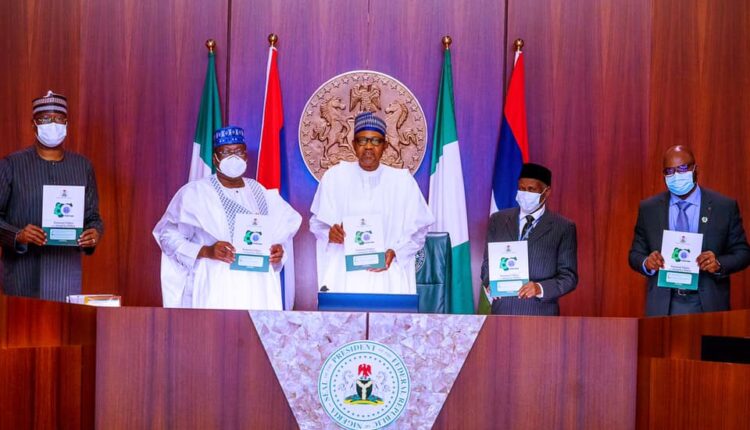 President Muhammadu Buhari has expressed that it is only through smooth working relationships among three tiers of government could the country achieve more and fight against forces that have been keeping the forces aback, particularly in the area of systemic corruption.

He explained if the executive, judiciary, and legislative arm of government could close ranks and come together to work for a common goal by restoring national ethics and value, the fight against corruption would be won.

The President said that the should the tiers of government keyed into the cherished traditional ethical values, including integrity, hard work, truth, justice among others, corruption and corruptive tendencies would be a thing of the past across the country.

The President made the call during his speech on Monday in Abuja at the Independent Corrupt Practices and Other Related Offences Commission (ICPC) 2nd National Summit on Diminishing Corruption and launch of National Ethics and Integrity Policy, an event to mark the 20th anniversary of the establishment of the anti-corruption agency. The Policy was put together by the ICPC, in collaboration with the Office of the Secretary to Government of the Federation, and the National Orientation Agency.
According to him, progress could only be achieved in the delivery of dividends for the citizenry when the arms and tiers of government work together in stamping out systemic corruption across all sectors.
“I recognized in 1984 as I do even more now that corruption poses a clear danger to Nigeria, so, we cannot relent in efforts to eradicate it from our society. As I have often reminded Nigerians, ‘If we do not kill corruption, corruption will kill Nigeria. I believe that it is when the three arms and the three levels of government work together that the government will be enabled to serve the country. We will also see the positive impact of our efforts reaching all and sundry across the country.
“Bearing this critical factor in mind, I am happy that the theme of this year’s Summit by ICPC is, TOGETHER AGAINST CORRUPTION. I am aware that this theme derives from the theme of our 60th-anniversary celebration. Together as a nation, as a people, the three arms and three tiers of government working together, we can attack corruption and realize the vast potentials of our country,” the President was quoted as saying in a statement by his spokesperson, Femi Adesina.
President Buhari reiterated his earlier call on the judiciary to undertake reforms that will fast-track the delivery of justice for the common good.
“We need to deploy resources to address our common needs rather than the greed of a callous few. We need a corruption-free public sector to achieve this transformation; we need a judicial system that dispenses justice without undue delay and technicality. We need laws and legal system to be reformed to deliver justice to every citizen without regard to status and finally we need ethical re-orientation of the people to achieve this goal. When we work together against corruption we can defeat it.”
Others at the occasion include the Senate President Ahmed Lawan, Chief Justice of Nigeria, Ibrahim Tanko Mohammed, Governor Kayode Fayemi of Ekiti State, Minister of Justice and Attorney General Abubakar Malami (SAN), and United Nations Resident Coordinator Edward Kallon.