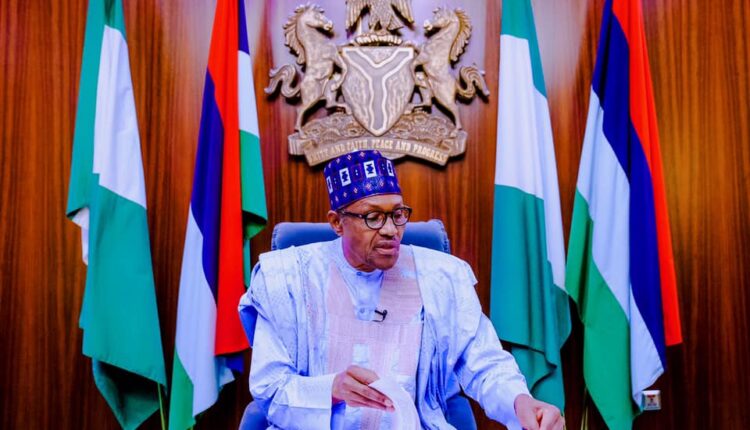 President Muhammadu Buhari has called on Nigerians across the country to join hands and work together in actualizing the dream of nation-building and putting Nigeria on pedestal of progress for benefit of all and sundry.

He said that there was need for Nigerians, irrespective of tribe, religious, ethnic, and political affiliations to sheat their grievances and close ranks in protecting the unity being enjoyed in the country despite agitation from some sections seeking to secede.

The President argued that the country as an indivisible geo-political entity was more beneficial to Nigerians than becoming units of nationalities as being pushed for by some groups agitating for self-determination.

Buhari, who made the call during a nationwide broadcast to mark Nigeria’s  60th independence anniversary on Thursday, said that it was pertinent for Nigerians to continue on the path of nation-building collectively, saying Nigeria as geo-political entity would be more beneficial to every citizen than going separate ways.

According to him, we are greater together than being smaller units of nationalities and citizens should continue to do the right things to promote unity and understanding among the diverse ethno-religious groups in the country, to achieve desired goals of nation-building.

“Fellow Nigerians, our history has shown that we are people that have the capacity to live peacefully with one another. Fellow Nigerians, to achieve the great nation we desire, we need to solidify our strength, increase our commitment, and encourage ourselves to do what is right and proper even when no one is watching.

“Let us collectively resolve to continue our journey beyond the 60 years on the clear understanding that as a nation we are greater together than being smaller units of nationalities. By the sufficient grace of God we shall come through current transient challenges.”

The president also stressed the need for the country to begin a sincere process of national healing, saying that the current anniversary presented genuine opportunity to eliminate divisive tendencies and discard acts capable of dividing the nation or promoting primordial sentiments.

“We need to begin sincere process of national healing and this anniversary presents a genuine opportunity to eliminate old and out-worn perceptions. The stereotype of thinking of ourselves as coming from one part of the country before seeing ourselves as Nigerians is a key starting point to project us on the road to our deserved nation’s evolution and integration.

“To start this healing process, we are already blessed with the most important asset any nation requires for such – our people– and this has manifested globally in the exploits of Nigerians in many fields.

“It has been demonstrated time and time again that Nigerians in the diaspora frequently excel in science, technology, medicine, sports, arts, and many other fields. Similarly, the creativity, ingenuity and resourcefulness of the Nigerian at home has resulted to global recognition of our endeavours,” he said.