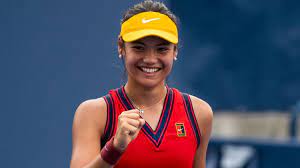 The British teenage tennis player, Emma Raducanu, has eased into her first US Open semi-final after defeating World number 11, Belinda Bencic, in straight sets during their quarter-final encounter.

Radubanu showed all of her quality and composure in a 6-3 6-4 win and became the lowest-ranked player to come through the qualifiers and reach the semi-final of the US Open since Belgian former player, Kim Clijsters, who won the tournament on her comeback to the sport in 2009.

The 18-year-old sportswomen’s victory on Wednesday against the Swiss tennis star indicated that she would face Czech fourth seed Karolina Pliskova or Greek 17th seed, Maria Sakkari, in Thursday’s semis.

Irrespective of the outcome, the teenager is expected to rise to the cusp of the world’s top 50 and become the British women’s number one tennis player when the WTP ranking is released after the tournament.

In only her second Grand Slam appearance, world number 150, Raducanu, has become only the third woman ranked outside the top 100 to reach a US Open semi-final.

After coming through three qualifying matches to reach the main draw, Raducanu is yet to drop a set in her eight matches at Flushing Meadows and she has become the first qualifier to reach the last four at the competition.

After sealing victory with her first match point, Raducanu clasped her head with her hands before Olympic champion Bencic sportingly came around the net warmly embrace the victor.

A beaming smile broke out across the Briton’s face as she pointed to her team – in a mixture of shock and celebration – and contemplated what she had just achieved on Arthur Ashe Stadium.

Speaking after the victory, she said: “I’m so, so happy to come through. Belinda she is such a great opponent and in good form, her ball speed caught me off guard so I had to adjust and adapt. I’m just taking care of what I can control and I’m on my own journey.”