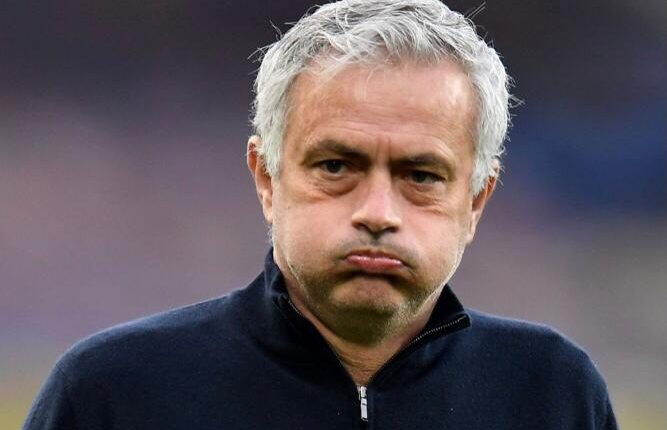 The management of English football club, Tottenham Hotspurs, has terminated the appointment of its team manager,  Jose Mourinho, over the club’s disappointing second half to 2020/2021 Premier League season.

Mourinho, who signed a 4 years contract with Tottenham Hotspurs, has been replaced with Ryan Mason and Chris Powell, who would both see the club through the end of the league pending when the management would agree on a suitable replacement for the Portuguese tactician.

The termination of the coach’s appointment on Monday by the club came after being summoned for talks on plans for the Carabao Cup final against Manchester City on Sunday, 25th, April 2021.

Through a statement by the club’s chairman, Daniel Levy, added that the coach backroom staff, Joao Sacramento, Nuno Santos, Carlos Lalin, and Giovanni Cerra, have also been relieved of their duties.

Levy added: “Jose and his coaching staff have been with us through some of our most challenging times as a Club. Jose is a true professional who showed enormous resilience during the pandemic.

“On a personal level I have enjoyed working with him and regret that things have not worked out as we both had envisaged. He will always be welcome here and we should like to thank him and his coaching staff for their contribution”.

On why the management terminated the coach’s appointment, the chairman explained that under Mourinho’s leadership, Tottenham struggled particularly in the ongoing season, currently lying in 7th place in the Premier League table.

“Spurs also crashed out of the Europa League, following a shocking 3-0 defeat in the 2nd leg against Dinamo Zagreb, despite having a two-goal advantage in the first leg.

“Mourinho had signed with Tottenham in November 2019, replacing Mauricio Pochettino at the helm. He had signed a deal with the club until the 2023 season. In his first season with the club, Spurs saw a rise from the 14th position to the sixth position in the Premier League table”.