Four people dies,14 others escape death during earthquake in… 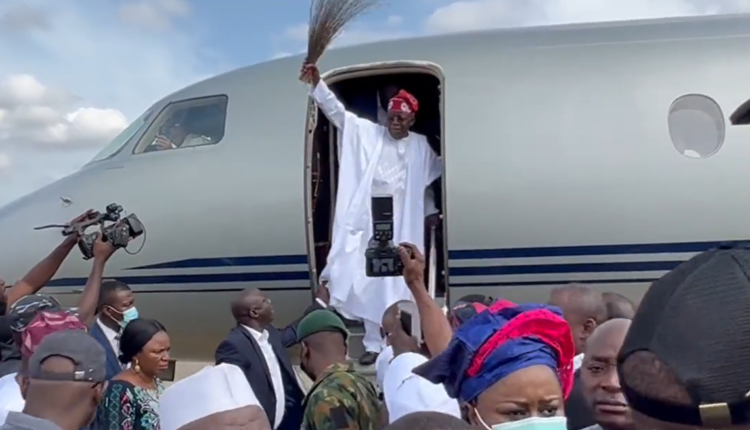 Contrary to speculations that the presidential candidate of the All Progressives Congress (APC), Bola Tinubu,  was sick and hospitalised, the Lagos State former governor has returned to Nigerian, with the sole aim of kick-starting an aggressive campaign alongside his running mate, Kassim Shetimma, ahead of next year’s election in the country.

Tinubu arrived at the Nnamdi Azikiwe International airport in Abuja, barely 12 days after leaving the country for a strategic political and economic consultation in the United Kingdom (UK), amid claims that his decision to travel abroad was basically to hide his ailment from Nigerians.

But on arrival into the country on Thursday,  the APC presidential candidate did not show any sign of ailment, rather was alert to activities around him as well as looking more fit than before.

Welcomed by selected members of the relatives, APC members, and associates, the presidential candidate wore a Panama cap to depict his new nickname, the City boy.

Among those that went to welcome him at the Abuja airport was the Plateau state governor and Director general of his campaign, Simon Lalong, his running mate, Shetimma, the Edo state former governor, Adams Oshiomhole, and others.

As a mark of appreciation to those that had come to welcome him, Tinubu, in a Video obtained by The Guild, was seen shaking hands as well as hugging everyone at the port to show his satisfaction for their gesture.

A source close to Tinubu told The Guild that he would be going straight to a meeting with alleged aggrieved APC presidential aspirants and other members, to get them fully involved in the party’s campaign scheduled to commence on October 10 in Kwara State.

Aside from that, the source added that the APC presidential flagbearer would be meeting with the National Working Committee (NWC) with the aim to scrutinize the composition of the Presidential Campaign Council (PCC) and ensure it was well expanded to accommodate all major stakeholders of the ruling party.

The source added that part of the activities Tinubu had planned to embark on was to address all grievances that could negatively affect the party’s chances during next year’s poll.

Another source that accompanied him on the trip disclosed that Tinubu has concluded plans to embark on an extensive grassroots campaign and mobilization, going from state to state to engage the electorate and read his manifesto to them which is all-encompassing.