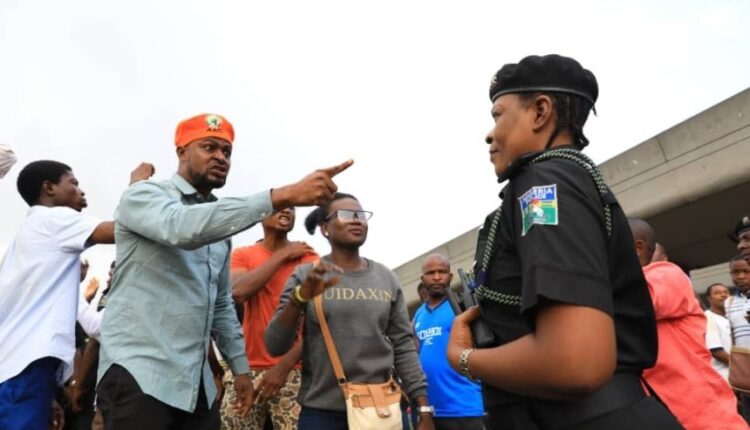 The Convener of  RevolutionNow movement and publisher of Sahara reporter, Omoyele Sowore, escaped police arrest by a whisker after the Lagos State Police Command arrested 19 other revolution fighters protesting alleged repression and insecurity across the country.

While Soworo escaped police arrest, publisher and journalist, Agba Jalingo, was not so lucky as he was arrested alongside 18 other protesters said to be demanding for good governance.

Their agitations were against the level of ongoing corruption playing in the country, hardship on the common man and as well as general issues they claimed to be affecting the country

Confirming their arrest, a source from the state’s Criminal Investigation Department disclosed that 19 protesters were arrested for breach of law and order and that they would be charged to court.

As gathered, the arrested protesters refused to write statements as directed by police and expressed that they were prepared to be jailed if need be.

It would be recalled that the protesters’ first attempt on August 5th, 2019, was met with stiff resistance by the authorities across the country which led to arrest of Sowore, Bakare among others.

The day, tagged “Day of Rage”, they claimed was to ‘demand an economy that works for the masses, effective end to insecurity, stopping corruption in high places, immediate implementation of the new minimum wage, free and qualitative health care services among others.’

However, the protesters on Wednesday, said they won’t be deterred in their quest to demand good governance and accountability from President Muhammadu Buhari-led administration, stressing that true freedom comes with struggle and sacrifice.

The group, through a protest pamphlet obtained by our correspondent, said that its members would not stand and watch while the country continues on the path of ruin, joblessness, and insecurity.

“Many of us were beaten, harassed, hounded, and unjustly arrested. But we know that freedom comes only through struggles. Our movement is here to stay because our demands are those of the masses. And in the face of injustice, there must be resistance.

“One year after, the need for a revolution is even more obvious. The masses continue to suffer severe repression. Incapable of improving the lives of the masses, the ruling elites loot with reckless abandon and inflict more hardship on us.

“They recycle themselves during elections, leaving no room for real change. We the people must stop corruption, repression, and exploitation. Our struggle is for system change and thus we call on the poor masses and youths to take action,” the group said.