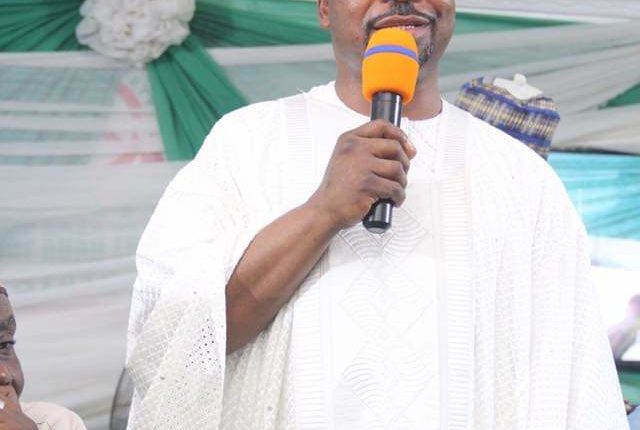 The National Union of Road Transport Workers (NURTW) has suspended its Lagos chapter’s Chairman, Musiliu Akinsanya, popularly called Mc Oluomo, indefinitely over alleged misconduct, insubordination, and inciting members of the state chapter against the apex body, the development of which may be connected to a protest staged by Mc Oluomo supporters during which they accused the union at national level of unnecessarily interfering in the state affairs.

NURTW has also directed MC Oluomo to immediately hand over the mantle of leadership to his deputy chairman and release all property belonging to the transport body in his possession to State Secretary, in a bid to avoid any leadership vacuum in the state.

It alleged that the decision to place MC Oluomo on indefinite suspension was basically to prevent any breakdown of law and order after it came to its notice that he was already inciting members against the union, an act that is completely against NURTW constitution.

MC Oluomo’s suspension was contained in a letter sent to him on decisions taken by the national body as regards his recent conducts which Union described as a total disregard for the constitution governing members’ activities across the country.

From a leaked letter prepared on Wednesday for Akinsanya’s suspension, the union claimed that the disciplinary action was in line with constitution of the body and that the state chapter chairman had violated the NURTW law severally such that had to continue posing threats across the body’s branches in Lagos. 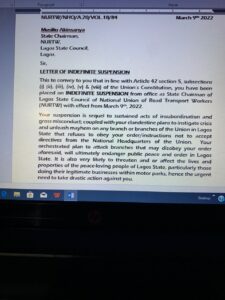 According to the letter signed by the General Secretary for the national body, Kabiru Yau, the Union promised to often ensure that the NURTW constitution remains sacrosanct and adhered to by members across the country.

The letter reads: “This is to convey to you that in line with Article 42 section 5, subsection I, II, III, IV, V, and VIII of the union’s constitution, you have been placed on indefinite suspension from office as State Chairman of Lagos State Council of National Union of Road Transport Workers (NURTW) with effect from March 9th, 2021.

“Your suspension is sequel to sustained acts of insubordination and gross misconduct coupled with your clandestine plans to instigate crisis and unleash mayhem on any branch or branches of the union in Lagos state that refuses to obey your order or instructions not to accept directives from the national headquarters of the Union.

“Your orchestrated plan to attack branches that may disobey your orders aforesaid will ultimately endanger public peace and order in Lagos state. It is also very likely to threaten and/or affect the lives and property of the peace-loving people of Lagos state, particularly those doing their legitimate businesses within motor parks, hence the urgent need to take drastic actions against him. 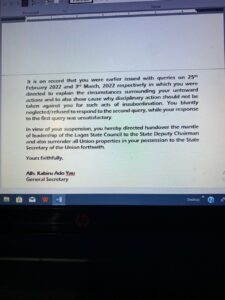 “It is on record that you were earlier issued with queries on 25th of February 2022 and 3rd of March, 2022 respectively in which you were directed to explain the circumstances surrounding your untoward actions and to also show cause why disciplinary actions should not be taken against you for such acts of insubordination. You bluntly neglected/refuse to respond to the second query, while your response to the first query was unsatisfactory.

“In view of your suspension, you are hereby directed to hand over the mantle of leadership of the Lagos State Council to the State Deputy Chairman and also surrender all Union properties in your possession to the State Secretary of the Union forthwith”.