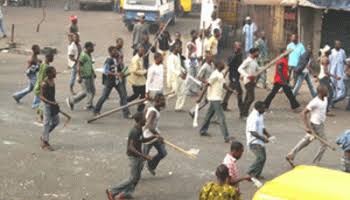 No fewer than one person has been killed and scores injured when factions National Union of Road Transport Workers, NURTW clashed at Okokomaiko motor park, Ojo Local Government, Lagos State.

The Guild gathered that one of the faction was loyal to the NURTW Chairman in the State, Musiliu Akinsanya popularly called MC Oluomo while the others were said to be staunch followers of the former chairman, Tajudeen Agbede.

Eyewitness told our correspondent that the clash broke out at about 8pm on Wednesday, leaving several commuters to scamper for safety.

He added that both members of the factions were armed with different weapons when the clash broke out.

It was learn that commercial activities were paralysed immediately as several petty traders left their goods at their stall, running to safe places.

Another eyewitness, Miss. Happiness Ilo, told the Guild that the Police officers attached to the Okokomaiko Police Station could not restore normalcy at the time of filling this report.

Another commuter, Mr. Hamed Akinsola, told the Guild that many vehicles could not pass through the bus stop, saying, I was forced to take another route which was more tedious than passing through Okokomaiko.