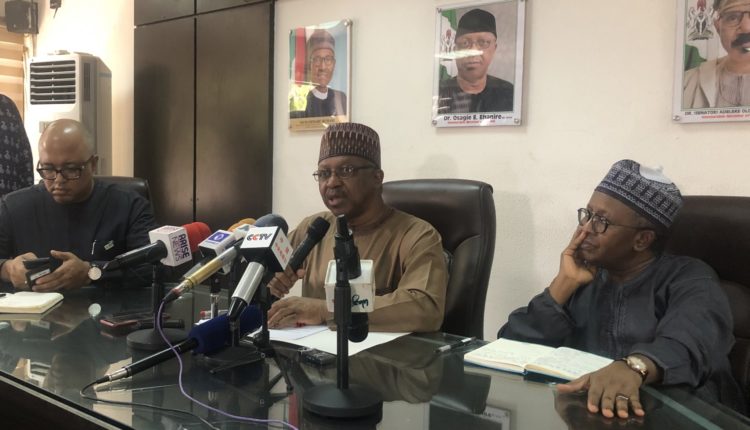 The Federal Government has announced five new cases of the deadly coronavirus in the country bringing its total number of confirmed cases to eight.

The announcement came barely hours after the government placed travel ban on flights to and from thirteen specified coronavirus threat nations.

According to the Minister for Health, Dr. E. Osagie Ehanire, who confirmed the new cases on Wednesday, the five newly confirmed cases included two Nigerians and a six-week old baby who arrived the country from the US, two other Nigerians who arrived from the UK and a foreign national who came into the country through its land borders.

Ehanire, speaking at a press briefing on Wednesday, explained that the six-week old baby was Nigeria’s youngest confirmed case of the global pandemic and that the foreign national patient was also its first land border crossing infectious case since inception of the disease in the country.

He revealed that four of the five new cases had occured in Lagos State, with one in Ekiti State, and assured Nigerians that all cases were being treated appropriately by health officials in the affected states.

The minister reiterated his ministry was set to increase collaborative efforts with the Nigerian Customs Service and the Nigerian Immigration Service towards protection of all land borders with aim to avoid further cross-border importation of the deadly coronavirus.

“Nigeria is in the Importation stage of #COVID19, not the Community Transmission Stage. That’s why we are very focused on Contact Tracing at this time. The National Center for Disease Control is doing a good job supporting State Health Authorities with tracking and tracing.”

He stated that the country had, as yet, no casualty from the disease and recalled that one of the three earlier cases had recovered and was discharged, but noted that the country could not rest on its oars as much needed to be done to ensure that further importation of the viral pandemic was curbed from getting into the country.

Ehanire called for calm and urged Nigerians to continue to uphold personal hygiene, hand washing and regular hand sanitization, in a bid to protect themselves from the viral pandemic and curb its spread.

FLASH: Nigeria has recorded 5 new cases of #Coronavirus, bringing to 8 confirmed cases in the country. All 5 cases had a travel history to the UK and US. Nobody has died from the disease in Nigeria and one of the earlier three cases had completely recovered. #COVID19Nigeria

FG places travel ban on China, Italy, US, others over coronavirus