JUST IN: Sanwo-Olu’s aide dies during auto crash in… 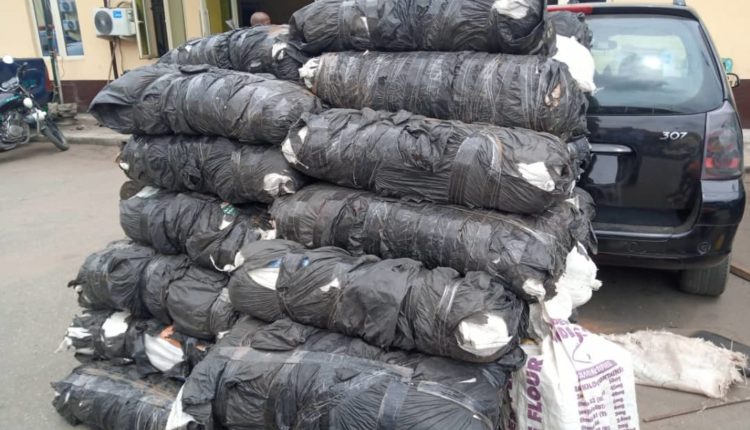 It was the end of the road for a dismissed soldier and his accomplice who must have been parading themselves as uniform men after operative of Lagos State Police Command apprehended two of them for being in possession of about 1,200kg of Indian hemp and hard drugs.

The suspects, a dismissed soldier, identified as Okoliko Andrew, and his partner, Idowu Adebayo, were intercepted with vehicles in which they were conveying loaded substances suspected to be Indian hemp before they were intercepted around Itowolo towards Ikorodu area of the state.

The two men who were said to have been initially stopped for plying Bus Rapid Transport (BRT) corridor around Itowolo, an offense which contravenes the state traffic laws. The state had prohibited motorists from plying the BRT corridors.

However, the Guild gathered that upon further interrogation by the police operatives attached to the state’s Task Force team, the suspects who were parading themselves as uniformed men ran out of luck after it was discovered that they were smuggling substances.

An eyewitness disclosed that the suspects initially stopped by the Taskforce team for plying BRT corridor tried but that they could not bail themselves out of the trouble.

“But trouble started when they failed to properly identify themselves as they had earlier claimed during initial interrogation. So, acting with on spot intelligence, the task force team stopped them and upon further interrogation, they discovered they were carrying banned substances which led to their arrest,” he said.

While confirming the arrest, another source from the task force team, who does not want his name in print because he was not authorized to speak to newsmen, said the police seized 24 bags of 50kg of Indian hemp and also recovered other outlawed drugs from the suspects.

The source disclosed that the suspects who met their waterloo were intercepted driving two vehicles which were Toyota Corolla with registration number CE APP 903FR and a Peugeot 307 with registration CB 686 ABJ, and were said to be living at No. 1, Pedro Compound, Charley Boy, area of the state.

The source added that the arrested suspects claimed they were to deliver the bags of Indian hemp to someone at Sura Market at Lagos Island and that the owner of the banned substances promised to pay them N50,000 after delivering the substances.

However, efforts to reach the Chairman of Lagos Taskforce, CSP Olayinka Egbeyemi, and the agency’s Head of Public Affairs Unit, Adebayo Taofiq, proved abortive as repeated calls to their lines were no connecting.

Also, as at the time of filing this report, the Lagos State Police Public Relations Officer, DSP Bala Elkana, was not available to confirm the arrests or respond to our correspondent’s inquiries.