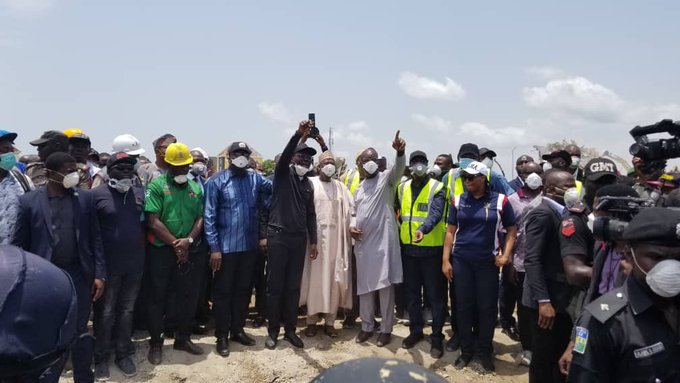 Days after a gas pipeline exploded in Abule Ado, Amuwo Odofin Local Government, Lagos, State Governors have donated the sum of N200 million to the victims of the gas explosion that claimed lives.

The governors, under the umbrella body, Nigeria Governors’ Forum, made the donation after visiting the scene and observed level of damage recorded during the explosion with the view that Federal Government rehabilitates victims and reconstructs the community.

Donations for the victims, it would be recalled was initiated by the Lagos State Governor, Babajide Sanwo-Olu, after his visit to the scene, setting up N2 billion relief funds for the victims’ rehabilitation and reconstruction of the community.

Some of the governors that visited the scene with Sanwo-Olu were: Governor Kayode Fayemi of Ekiti State, who also doubles as the Chairman of Governor’s forum, Governor Abdullahi Ganduje of Kano State,  and his Edo State counterpart, Godwin Obaseki.

Announcing the governor’s donation, Chairman of the forum and governor Ekiti state, Kayode Fayemi, on Saturday, expressed his dissatisfaction with level of damages recorded at the scene.

The governors’ visit, meanwhile, came barely 24 hours after the death toll recorded from the scene jumped to 22 with one other body declared by emergency officials as still missing.

It would be recalled that the explosion which occurred at about 8am last Sunday has rendered some of the residents in the area homeless with about a hundred homes affected including Bethlehem Girls college where the Principal, Rev Henrietta died while trying to rescue some students when the school building collapsed.