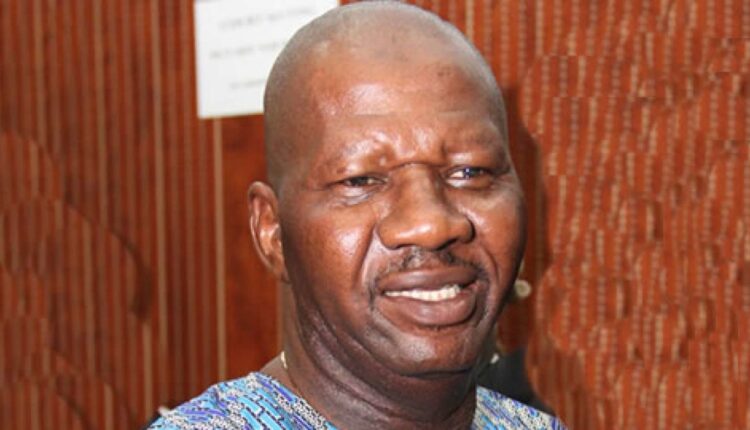 Veteran Nollywood actor, Babatunde Omidina, known better as Baba Suwe has died at the age of 63 after prolonged health issues that led to his disappearance from the screen.

The comic actor known for his unusual dressing pattern was said to have breathed his last on Monday. His daughter, Adesola Omidina, who announced the development did not revealed cause of the actor’s death.

Confirming the incident, the President of the Theatre and Motion Pictures Association of Nigeria (TAMPAN) Bolani Amusan, known better as Mr Latin said that though details of Baba Suwe’s death were still sketchy, the actor’s son had personally called him to break the sad news.

On his part, another veteran actor, Adebayo Salami, popularly known as “Oga Bello” said that the death of Baba Suwe has left a huge vacuum in the Nigerian Comedy industry.

While paying tribute to late Omidina, describing him as an extraordinary comedian, Salami said that he had believed that late Omidina would recuperate soon only to be confronted with the news of his demise.

“We thank God for everything. Baba Suwe is someone we have been looking forward to that one day, he will get well, but almighty Allah has taken His decision. There is nothing we can do about it.

“We can only pray that his soul rest in perfect peace and may almighty Allah forgive his shortcomings and stand by his relations to bear the huge loss.

“Unfortunately, his demise left huge vacuum in the Nigerian comedy industry. His fans started missing him a long time ago, when he became ill. He is a talented person. A clown. Whatever he does or says appeared funny. His colleagues, too, will miss him greatly,” he said.

Omidina was born on Aug. 22, 1958, at Inabere St., Lagos Island, where he grew up, but hails from Ikorodu Local Government Area of Lagos State. Omidina began his acting career in 1971 but came into limelight after he featured in a movie titled “Omolasan”, a film produced by Obalende.

He became more popular after he featured in “Iru Esin” in 1997. He had featured and produced several Nigerian films such as: Baba Jaiye Jaiye.

The Yoruba actor was in 2019 admitted at the Lagos University Teaching Hospital (LUTH), Idi Araba, in Lagos State over an unknown ailment. He was in April 2019 flown to the United States of America, where he went for treatment after falling ill to diabetes with the support of Rev Esther Ajayi, who supported the oversea medical treatment with a sum of N10million.

Also, in 2011, the actor was detained by the National Drug Law Enforcement Agency (NDLEA) on suspicion of drug trafficking after a body scanner at the Murtala Muhammed International Airport Lagos identified suspected drugs in his stomach.

With the assistance of his lawyer, the late Bamidele Aturu, the allegation was described as false and defamatory by the ruling of a Lagos High Court. Since these incidents actor has not been active for years due to his failing health, which many attribute to his incarceration by the NDLEA.