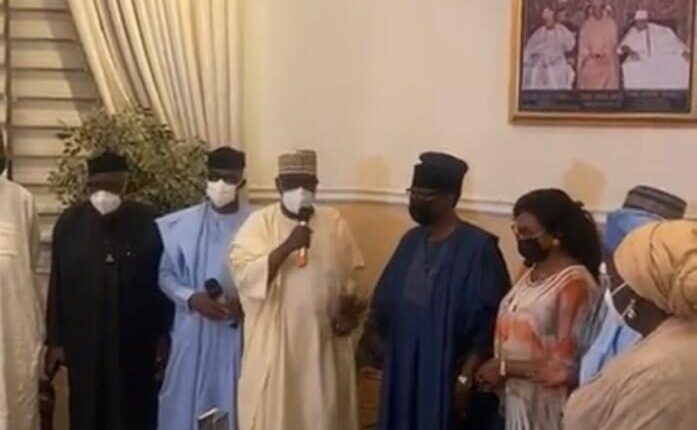 Other governors, who APC governors from the North and South-West, were Rotimi Akeredolu (Ondo), Abdullahi Ganduje (Kano), Atiku Bagudu (Kebbi), and Sani Bello (Niger) were also at the reception held at his home.

Also at the event to receive Daniel into APC were the Deputy Governor, Noimot Salako-Oyedele, the Chairman of the Board of Trustees (BOT) of Tertiary Education Trust Fund (TETFund), Kashim Ibrahim-Imam, former gubernatorial candidate, Gboyega Isiaka popularly called GNI, and others.

Before the reception on Tuesday, Daniel was said to have picked up participated in the ongoing APC registration and revalidation exercise across the country.

The former governor was the campaign manager for the PDP’s presidential candidate during the last general election, touring the entire states with the party’s candidate which was contested by Atiku Abubakar.

Addressing the gathering, Bagudu disclosed that the reception would have been done tomorrow but that the caretaker chairman, of the party, Mai Mala Buni, who is also the governor of Yobe State, directed that they should receive him into the party.

The Kebbi governor, who was along with other APC governors from the north to visit Shasha community in Akinyele Local Government, Ibadan, Oyo State to resolve the face-off between the Yoruba’s and Yoruba.

He noted that after the visit, they were about to leave when the call that they should receive the former governor into the party fold.

“We are in the process of leaving Oyo State when the caretaker chairman of the party, Mai Mala Buni, who is also the governor of Yobe State, directed that we receive the former governor since we are closer to the state. He would have come tomorrow but believed that we should do it today since we have several governors here”, he added.

Ganduje, meanwhile threw jabs at the PDP describing the party as a small river that cannot contain big fishes including Gbenga Daniel, and that APC was an ocean that can contain any size of fish.

He added that the ongoing registration and revalidation of members for the APC has helped to bring the big fishes in all small rivers into the big ocean where they can move freely without any hindrance.

His Niger counterpart, Bello, described the defection as an excitement for the party and him considering the wealth of experience that the former governor would add to APC.

“I cannot tell you how I am excited. And that was why I said that we all must come here to welcome you. We have told President Muhammadu Buhari of your coming and in another few days, the President will be receiving you into the party.

“The party has its own issues and we are working on them to ensure that the party becomes the best in the continent. We know that you are coming with a lot of people and that shows that the people know that you will not send them to a party that will not benefit them”.

At the reception, the Ondo state governor described the defection of Daniel into APC as a formality, saying, he had been progressive over the years and his support for PDP was like a passenger that needed a vehicle to achieve his aim.

“What we are doing is not welcoming him but the former governor is returning home. I knew that PDP was a vehicle and that you are a progressive. And I must say that you stayed too long in PDP because you are progressive in your heart. I can assure you that we are once you have joined us, you are the same as the old party members.

“I want to urge you that whatever you can do, ensure that you mend the fence within the party. we all should work together and take the party to a greater height”, Akeredolu added.

The host governor, Abiodun, stated that the reception was the final process of the activities that had been ongoing over the years, noting that he and Daniel were good friends and that they had worked together in PDP particularly when he contested for his gubernatorial elections.

The governor added that Daniel, during a meeting with him before the 2019 election, promised to support his governorship ambition and that he did it perfectly.

“This is just the finality of the entire process that had happened before now. He is a very dynamic individual. He will add a lot of value to our great party. You are welcome to the party.

“We are a party and not a social club. We are looking for more people to join us. We are happy to say that before this reception, some of his lieutenants have been joining the party”.

Responding, Daniel explained that his decision to join APC was a well-thought plan and that his followers had been demanding that he made the decision public before now, saying, if you had visited my ward, you will see several people dancing over my decision.

“Today is not the time to speak but I can assure you that the decision to join APC was a well-considered thought. In the history of this country, people have challenges and if anyone believes he is patriotic, this is the best time to stand with the country”.

Just In: We are working on Sunday Igboho release from Benin detention- Ooni