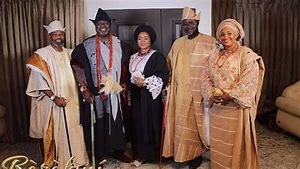 The Executive Producer of the African Magic Yoruba telenovela, Borokini, Leye Fabusoro, has called on the show’s fans to get ready for an other-worldly experience of fireworks and action, and be immersed in world-class cinematography on release of the show’s upcoming second season, which he revealed is being shot on location ahead of its ‘yet to be announced’ premier date, expected to be later in the year.

The prolific film-maker, who expressed his appreciation for the love and loyalty which ‘Borokini’ enjoys from its teeming fans, said that their shows of affection had not gone unnoticed but had built drive, by the cast and crew of the TV production, to produce a work which was even better, more titillating and far exceptional than its first season.

Fabusoro explained that ‘Borokini Season 1’ had  captured fans attention due to its marked difference in story telling style, as well as the obvious quality of work which had gone into its production, adding that he and members of his team were putting in their best to ensure that its sequel season would build on quality and afford fans greater quality than what was enjoyed during its debut season.

Speaking in an exclusive inteview with The Guild, Fabusoro revealed that the show’s second outing would feature plot twists, action and romance, as well as cast additions such as introduction of veteran actors Jide Kosoko and  Faithia Balogun, as well as several up coming acts to the over 1000-cast show.

Fabusoro, who has also produced hit shows such as Aajiirebi, Awon Aladun de, Family First and Eleyinju Anu amongst others, reiterated that he and his production team were more concerned with ensuring high viewer satisfaction, stating that work was therefore ongoing to present a state of the art picture production to Borokini fans.

He assured fans that the show was set to deliver, through its second season, what he described as “a departure from the normal yoruba story telling pattern”, and that highlights of the show would center around societal issues such as criminality, gansterism, drug peddling and so on, adding that fans should expect an action filled season which would keep them on edge of their seats.

“What should our fans expect? Action; deep, top notch acting, intelligent story telling…need I say more? If you feel ‘Borokini’ Season 1 is excellent, then watch out for Season 2. We are bringing premium television, high end visual effects to your screens,”

“We are on set, shooting this telenovela series, so a conclusive premier date is yet to be scheduled, but we expect that soon, in a couple of months, Season 2 will be ready for a grand opening for which everyone, cast and crew members alike, are very excited”.

Fabusoro thanked Borokini fans for the love which they had given the show and called for their continued support, saying that the series production team was set to bring even more addictive content to their screens.