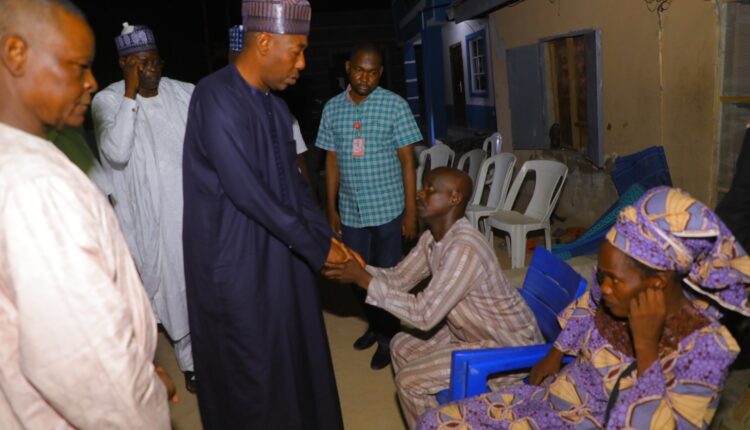 The Borno State Governor, Babagana Zulum, has disclosed that the Nigeria Police Force has arrested and put under detention killers of a 27-year-old man shot dead during violence that broke out between a demolition task force of Borno Geographic Systems (BOGIS) and worshipers at a branch of EYN Church in Maiduguri on August 5, 2021.

He added that the killer alongside other suspects who mastermind the attack have been arrested and currently undergoing investigation, noting that his administration was bent on resolving the issue and ensure justice was done.

Confirming the arrests yesterday when he visited Pastor Bitrus Tumba, the father of the deceased identified as Ezekeil, the governor assured the family of his commitment to ensuring justice as soon as the Nigerian Police completes ongoing investigation which he directed must be thorough.

According to him, so far, suspects have been quietly arrested and all those involved in that dastardly act are being detained and God willing, they will face justice, as soon as the Police completes investigation and make appropriate recommendations.

“We shall do justice to the matter without fear or favour. We share your pains. No exercise of government is ever aimed to cause injury let alone the death of any citizen. Every person in Borno has equal rights and we have a duty to protect the rights of all persons, top of which is the security of lives. We are pained by what happened and we condole you and your family. Although, I had sent people to you, I was morally and officially duty bound to visit your family. Please accept our deepest condolences,” Zulum told the bereaved family.

Responding on his family’s behalf, Tumba appreciated the governor for the visit and said that he considered Ezekiel’s death as an act of God which the family accepts in good faith. The cleric added that everyone dies in a different way, and God has destined Ezekiel to die from gunshot which no one could have stopped.

“Whatever we do, we cannot bring the dead back to life; as true Christians we have accepted it in good faith. Your Excellency we express our appreciation to you for the visit, I have followed all your efforts on the death of our son, and they show your concern and the fact that you did not forget us, we really appreciate you”, Pastor Bitrus said.

The Guild had on August 5 reported that one person was confirmed killed and five others sustained varying degrees of injuries during a clash between Church of the Brethren in Nigeria also known as EYN members, and joint security task force operating with the Borno State Geographical Information System in Maiduguri, the state’s Capital.

As gathered, the deceased, identified as Ezekiel, was killed by stray bullets fired by the operatives when the Borno Geographical Information System officials were trying to put down the EYN church branch building at Maduganari, in Maiduguri.

It was learnt that the fierce-looking JTF officers while trying to dispel protest from labourers working on the church’s rehabilitation allegedly aimed at the 27-years-old and shot him in the chest.