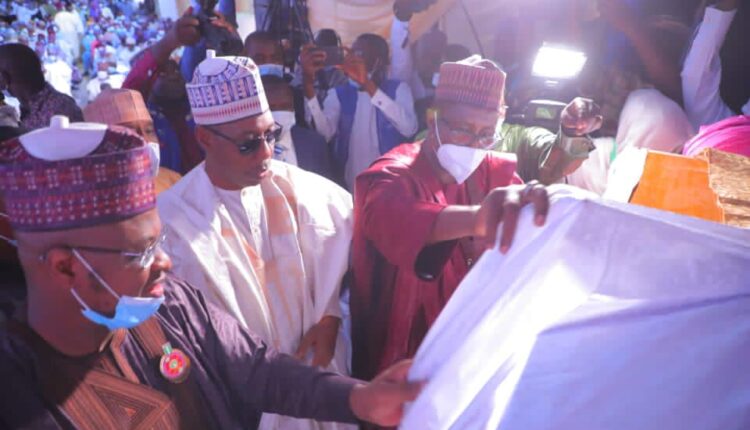 Share
In a bid to move away from devastating effect of insurgency, ensure return to normalcy and vibrant economy, the Borno State Government has unveiled a 25 years post-Boko Haram recovery plan as pathway to full recovery.
As learnt, the 25-year strategic plan with immediate, medium and long implementation phases, was developed as gateway through which the government targets to become world class after fully recovering from impacts of more than $6 billion worth of destruction caused by Boko Haram.
The state Governor, Babagana Zulum, said that the plan had been conceived as part of his administration’s commitment to rebuild the state and that henceforth, the development plan would be followed religiously and it would all governance activities would be tailored and executed with its dictates.
Speaking today at the launching of the plan held in Maiduguri, the state’s capital, Zulum said that the plan was formulated after careful consideration and consultation with relevant stakeholder across the state on how the state can speed up its recovery from destruction caused by Boko Haram, and explore its full potentials to become world class in years to come.
He added that his team who used an inclusive and participatory approach that included a consultative workshop to define the objectives and priorities, came up with a strategic development plan.
Zulum explained that the team led by his Adviser on Sustainable Development, Partnerships and Humanitarian Responses, Dr. Mairo Mandara, interacted with all stakeholders including the grassroots, Ministries and government agencies to collate views on immediate, medium, and long term needs of communities in all the 27 Local Government Areas before putting up the plan.
Also speaking, Dr. Mandara who gave an overview of the plan said that the document had in it planning and analysis, with a vision to ensure that in 2030, the state transforms from an insurgency ravaged society into a peaceful, stable and self-reliant society with over 70% productive population.
She added that while by 2045, the state hopes to deliver a prosperous society that stand as a leading regional agri-business and commercial hub that connects and supplies the markets of Central Africa and Northern Africa, reclaiming the glory of Old Borno Empire as the stabilizing power in tropical Africa.
Mandra explained that the 25-years plan was anchored on five critical pillars of Human Capital Development, Leadership in Agriculture, Healthy Citizenry, Sustainable Environment, and Regional Trade Hub for commerce that would provide jobs and prosperity to the citizens.
Those present at the event include Minister of Finance, Budget and National Planning, Zainab Ahmed,  Minister of Communications and Digital Economy, Dr. Isa Pantami, former Governors of Borno State, Kashim Shettima and Ali Modu Sheriff, serving and former National Assembly members, traditional rulers led by the Shehu of Borno, representatives from the international community, members of Borno assembly and executives, party leaders and diverse stakeholders, some of whom joined through the webinar.
Governor of Kwara State, AbdulRahman AbdulRazaq, and NNPC’s GMD Mele Kyari were also among high profile persons who joined via a zoom.