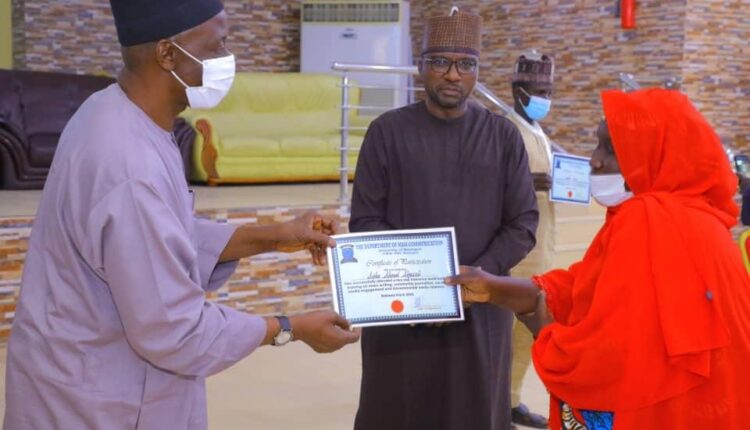 The Borno State Government has trained no fewer than forty persons, combining independent social media influencers from different groups and media aides on basic of public engagements among others in ensuring government activities and programs were well communicated and explained to the electorates.

It explained that the training is in line with Professor Babagana Umara Zulum’s knowledge-based approach to doing things, particularly in the areas of public engagements with the people.

The government noted that the selected participants undergo a two-day intensive and practical training on news writing, community journalism, social media engagement, and governmental media relations conducted by the Department of Mass Communication at the University of Maiduguri.

As stated, the training was approved by Zulum after it was initiated by the governor’s media aides led by the Special Adviser on Public Relations and Strategy, Isa Gusau, who stayed with participants in all two-day sessions of the training. The opening day was attended by the Senior Special Assistant on Media, Babasheikh Haruna.

The training, which held at the Elkanemi Hall of UNIMAID, began on Wednesday and ended on Thursday, saw participants through different topics that were taught by specialized mass communication lecturers in theories and practicals.

While Media laws in detail were jointly delivered by Dr. Nuhu Gapsiso and Dr. Amina Abana. There was a lecture on Information Management delivered by Abdulmutallib Abubakar and another on preparing press releases, press statements, and press conferences taught by Ibrahim Yusuf. The last lecture was on managing VIP media content delivered by Musa Usman.

During the highly interactive training, participants were subjected to thorough practical exercises and group presentations on news and feature writing, handling press releases and statements as well as media content management. Lecturers critically reviewed the exercises and discussed feedback. The participants were presented with certificates at the end of the training.

Vice-Chancellor of University of Maiduguri was represented by the dean, faculty of Social Sciences, Professor Danjuma Gambo, who commended Governor Zulum for approving such vital training and enjoined participants to make the best use of the opportunity.

Speaking on the training, Gusau said that the governor has been approving capacity-building initiatives for different categories of persons particularly teachers and medical workers in the state.

Gusau hinted that a similar training will be organized for conventional journalists who have direct dealings with the press unit of the government house.

He added that members of the Correspondents Chapel have chosen training on “Conflict and Post Conflict Reporting for Sustainable Development”, which he said was being discussed with trainers.

Also, the Senior Special Assistant on Media, Babasheikh Haruna, tasked participants to reflect on the knowledge they acquired in their future approach to social media activities.

The participants in their different comments thanked Governor Zulum for according them special consideration and promised to imbibe the knowledge gained.